2021 UPDATE: See my new listening guide for this track.

Here's the third of four big-deal transcriptions I have lined up for the fund raiser. I was going to save this for next week, but people have been slow to contribute, which, perversely, just makes want to keep dumping big, amazing stuff at you. Please help out with whatever cash contribution you can afford— this means you.

We already saw this as a groove o' the day, but here's the whole tune: Lopsy Lu, from Stanley Clarke's self-titled album of 1974, with Tony Williams on drums. 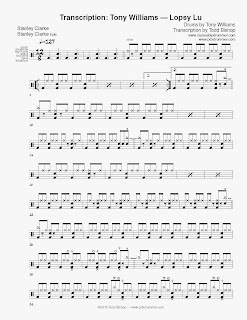 Tony is playing his big drumset here, with I believe four tom toms— where you see regular noteheads on line, those are the extra toms. I've also begun putting the hihats and ride cymbal on seperate lines; in this case, the hats are on the top line of the staff, and the ride cymbal above it.

This type of groove really wants strictly compound-meter stuff played with it— triplet-based stuff; as I noted on the GOTD, it can be really hard to sustain that while blowing. During his solo, Tony plays some duple 16ths, and they don't sit well— to my ears. I'm pretty much helpless to do that same thing when playing a similar style, and it never really works.


For diehard geeks (hopefully everyone), there's much explanation of the form after the break.

For an apparent nothing little blues riff of a tune, it can be difficult to follow the form— not least because at times there's *kof* a little bit of air in the band's execution of it. Don't sweat it if you're not able to follow all of this:

At the beginning, after two measures of solo drums, there are alternating 10 bar (B section) and 6 bar (A section) phrases; with the 10 bar phrase broken down into measures 10-8-8-8-6 beats long, with the little descending chromatic figure on the bass happening at the end of each measure. For ease of reading, I've notated that section in straight 12/8. Note that the repeats at the beginning of the tune are misleading— they're based on repetition in the drum part, not on the form of the tune. The same thing happens later with the repeats on page 5— they do not follow the musical phrase. I was just trying to squeeze the whole thing onto six pages.

Between measures 32-72, there's quite a bit of excitement:

After that, the band solos over the 8 bar A section vamp until the drum solo at measure 164, when they play a normal 6 bar A section, and then an extended, 18 bar B section— extended by repeating the 8-beat portion of the section several times. It almost sounded like Connors was going to go back to the A section, but caught himself and made it work.

After the drum solo, there is a single A section, and then the band fades out on a modified B section vamp.

It's not essential to know all that, but if you play this thing, or listen to it closely, you'll want to know what's going on— there's your answer.

Here's a bonus: A practice loop of the B section, in case you want to really kill it when you play this tune with your friends. Learn to play it while counting ten measures of 4, and also 10-8-8-8-6: