Ed Blackwell on playing with Monk 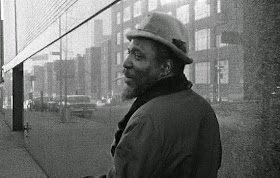 Another choice bit from Ted Panken's interview with Blackwell— Blackwell played with Monk in 1972:

I’ll tell you what happened with Monk. During the course of the gig, after about a week… He used to give me a lot of solos. Then one night we were playing, and he gave me a solo, and I played, you know, and after he came off the stand he come over to me and he said, “You know, you ain’t no Max Roach.” [LAUGHS] And I don’t know why he told me that! He just danced away. Wilbur Ware was in that group also.

I remember a story Art Taylor told me about Monk. He was playing with Monk in Chicago, and Monk had stopped letting him solo. So during the course of intermission, he came over, and A.T. said, “You know, you cut off my solos, man. You used to give me little solos. Why don’t you let me play?” So he said when they went back up to the set, Monk went to the mike and said, “We will now hear a solo by our drummer.” And that was it!
Todd Bishop at 7:56 AM
Share