Ed Blackwell on playing the Five Spot with Ornette 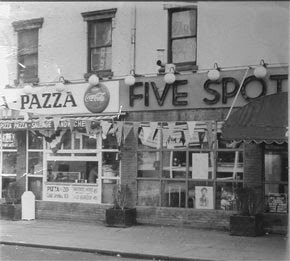 From Ted Panken's 1986 interview with Ed Blackwell on WKCR NY:

So when you got to New York, you found yourself in the midst of the scene that was shaking New York’s art community to the core.
EB: Right. Well, I’ll tell you. The day I got a taxi to the front of the Five Spot. We went into the Five Spot, and Ornette pulled out his horn, and Don Cherry, we ran over our tunes, and he said, “Fine.” We went home and changed clothes and came back to work that night. And we worked there steadily for seven months, six nights a week straight.

Describe the way sets went down at the Five Spot. Were the pieces similar length to the records? Did you stretch out more?
EB: During this time most of the clubs were featuring two bands a night. There would be four sets. Ornette would play two sets and the visiting band would play two sets. This was going on for like six nights a week. We had a chance really to stretch out during our sets. Sometimes Ornette would stretch out our set, and sometimes he would just cut them a little shorter, depending on what mood he was in. But it was always intense. A lot of times we would rehearse all day and then come to work that night, and everybody was always geared up to play. The energy that flowed through that band was phenomenal.

Did people ever sit in?
EB: No. No, not too many people were sitting in with the band. [LAUGHS]