If you've been reading the blog regularly, you probably know that partido alto is the name of a rhythm used in Brazilian music. It's also a style of samba, a funk samba groove, and the title of a famous tune by Chico Buarque, and also a fusion-era tune... which uses that funk samba groove. There is some overlap between those things— an actual Brazilian music expert might be able to explain the distinctions between them precisely. We're transcribing the fusion tune, as recorded by Airto in 1979, on his album Touching Me Touching You. I've written it out just up to the beginning of the solos: 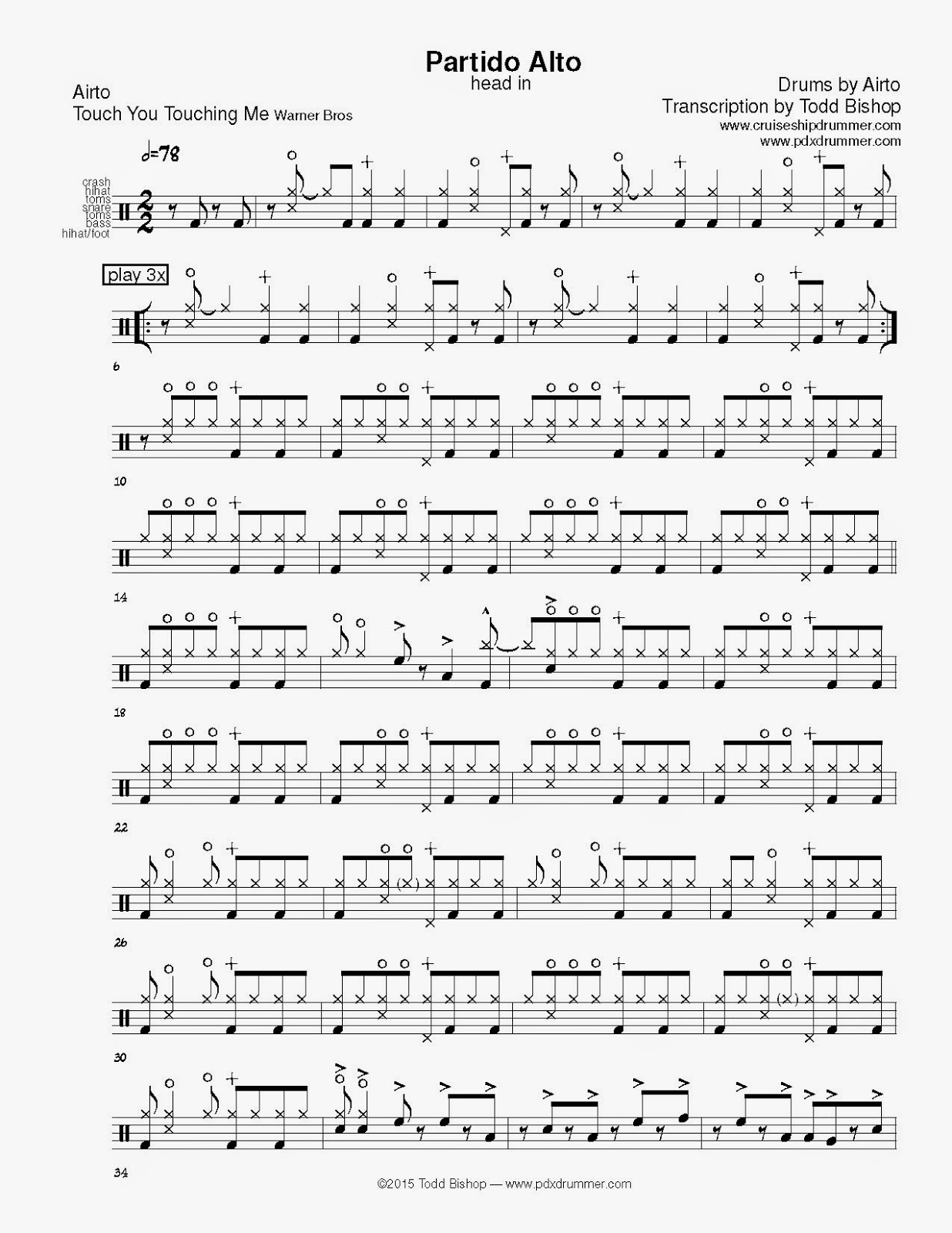 The phrasing is ambiguous, and at first it may be difficult for some people to even find the 1— the “downbeat” of the groove lands on the & of 1, with the snare drum (do watch the rhythm video above for help with that). Each four measure phrase could begin at the start of each line, or it could begin on the third measure of each line— the melody does land strongly on the third measure, and the solos begin on the third measure. But the keyboards enter at the beginning of a line, and putting the phrase on the third bar puts a phrase break in the middle of the unison ensemble figure (@ bars 41-44, and several other places). And that puts the bulk of the melody in the second half of the phrase, which I just don't like. The way I've written it, it's a little bit of a fractal; the shape of the larger structure is similar to the shape of the (two-measure) groove. They each start weakly, and are strong in the middle; the groove has the solid down beat on the bass drum in the second measure, and the phrase has the melody of the tune landing on bar 3. Try feeling it either way, and see what works for you.

To master the basic groove, you could just play the second and fourth lines many times. Airto appears to be using five tom toms here— if you don't have them, it doesn't matter; just play the written rhythm on whatever drums you want. The break at measures 45, 53, and a few other places, feels a little weird; make sure you take a moment to actually count it out— you may be able to listen and guess at it and be close, but you want to know exactly what's going on. Airto is not guessing at it. The starting tempo is half note = 78, but by the end of the solos it has picked up to HN=88, and settles a bit to HN=85 when the tune comes back in.