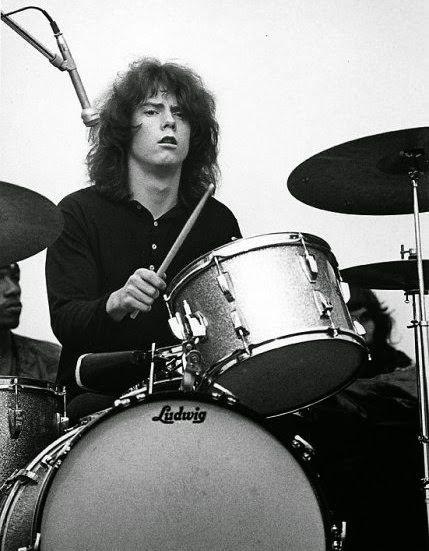 I'm not going to say anything more about the new hit drumming/jazz education melodrama Whiplash until I've actually seen it, but I will let you know about another great drummer, Michael Shrieve, sharing his thoughts about it with Dave Segel, at The Stranger. Editing/commentary in brackets is mostly Segal's, partly mine. I've compressed it slightly— do go read the whole thing.

I was excited to see Whiplash, of course, because it's about drumming, but I had several issues with it. That approach to teaching [physically and verbally abusive, dictatorial] is something I really don't care for. I think it's more damaging than helpful. It's [fine] to be inspiring and tough, but it's gotta be done with love, a different kind of attitude.

As far as [Miles Teller's character, Andrew Nieman's] technique and the portrayal of him working so hard that he's bleeding, that's completely unrealistic. [...] You can't get speed without relaxing. You can't get speed and control with your hands like that, getting bloody. If you're getting blisters, you're doing something wrong. It's not to say you're not going to get them when you're learning. But you're holding them too tight if you're doing that.

[...]let's say you have [a great band director;] he's gotta be strict and tough to get a great performance like that [... b]ut all those kids loved him, you know? They're not in fear. Music is supposed to be joyous, but of course you have to work at it. And I know it's the same with classical piano competitions for kids and violins. I think that that sort of approach is probably more abusive with piano and young kids going to those competitions and going for those placements with certain schools. It's very competitive. Jazz is a personal journey, too. You've gotta love that music and work really hard. That kind of teacher is a detriment to any path of improving in a way that brings joy and life to the music.