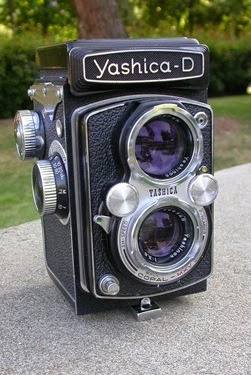 I had this camera sitting on a shelf for several years, and I finally got it working this summer: a Yashica D, medium-format, twin-lens reflex camera from the late 50s or early 60s. It's a Japanese copy of a more expensive Rollei TLR. Mine has a Yashikor lens, which is good, but not as valued by collectors as the fancier Yashinon. For some reason this model has always been a little bit of a dark horse among quality vintage TLRs, and I think I got mine for ~$25 on eBay. They tend to cost a little more now, but they're still an excellent value, and can be had for $50-120. As an old, seldom-used camera, the shutter times were off, and the shutter release itself had gotten jammed, so I looked online and found a guy named Mark Hama in Georgia, who specializes in servicing these cameras, and for $125 he CLAd (cleaned, lubricated, and adjusted) it, and it's basically a brand new camera now.

A TLR (twin-lens reflex) is an old-fashioned, somewhat steampunk-looking box-shaped camera with two lenses on the front— one lens is for the viewfinder, which you use to frame your shot, and focus; the other is for exposing the film. Today they look like antiques, but they were standard pro cameras as recently as the 1970s. You focus and frame your shot by flipping up the little hatch on top of the camera, and looking down into the 6cm square ground glass. It's fully manual, so you have to focus, set the aperture, set the shutter speed, cock the shutter, take the picture, and wind the film yourself. Advancing the film is done via a knob, which locks when you've reached the next frame. Which is nice— on a lot of cheap, older cameras— and on my Holga and Diana— you have to look through a little red window on the back of the camera, and look at the frame numbers printed on the paper film backing, which is slow, annoying, and easy to mess up. There is no light built-in light meter, so you can either purchase one, or use your digital camera as a light meter, or get a free/cheap light meter app on your phone, or just use the sunny 16 rule and guess at it, as I most often do.

The camera uses 120, medium format, film; 6cm-wide roll film. Cameras using 120 film shoot in a variety of image frame sizes; the Yashica D shoots the square 6x6 format, which is standard. You get twelve exposures per roll of film, which definitely requires an attitude adjustment in this age of image-spewing digital. But if you're just doing little art projects like me, often just in the course of daily life, you don't need reams of options, you need to take a second, look, think, get your shot, and move on. Even shooting with this cheap, old, camera, the results are far superior to anything you can get digitally— well, you could spend $5000-30,000 and get a new MF digital camera which will approximate the real image resolution of film. But medium format film gives you a beautiful tonality you basically can't get any other way. It makes ordinary things look like oil paintings. I feel the best digital cameras give you a lot of Blu-ray-looking eye candy. Aesthetically, not the same thing at all.

The Yashica D is just a perfect medium format running-around camera. It's reasonably compact and light, it makes you look cooler than your average camera-wielding tourist yahoo, but not too serious— that's actually important. But it's a real camera. I actually have some fine control over the focus, exposure, and framing. The toys, like the Holga, are fun, and I've gotten some very cool pictures with them, but they're unusable in many situations; I've wasted a good deal of film, and had a number of missed opportunities with them. At this stage, I don't always want to rely on chance to get a good picture. And the pictures from the Yashica still have a very subtly funky quality, due to the slightly-vintage, though very solid-performing Yashikor lens.

If you're thinking about buying one, I personally would get the cheapest one you can find and then have it serviced by Mr. Hama. It shouldn't be too hard to pick up one in near-perfect condition, but untested, or with the shutter speeds off— that should drive the price way down. Since there's no guarantee that a camera you pay more for will not need servicing anyway, and since after servicing they will each be perfect, new cameras, so you might as well pay as little as possible up front.

Some helpful links after the break:

A few links:
A little more about medium format film and cameras.
About Yashica TLRs.
Yashica TLR Flickr group. Discussion, photos, more.
Some guy writes about his Yashica D.
Way too much info on Yashica TLRs.
This guy is very excited about the Yashica D.
Another Yashica D mini-review.
More detailed review.
Yashica D pdf manual.
Vital statistics.
Flocking the interior of the camera.
Todd Bishop at 11:20 AM
Share