A cheap portrait lens for your Nikon digital SLR

Just did a little photo job, and realized something I should've figured out years ago— well, it something I knew about, but wasn't exploiting. If you aren't conversant in basic camera lingo, you might want to review my old What All The Damn Numbers On Your Camera Mean post before reading on.

1. Every Nikon lens ever made fits every Nikon SLR body ever made, film or digital. You may lose auto-focus, coupled metering, TTY flash, or other features, but you can take pictures in some capacity. My old 50mm/f1.8 AF lens that came with my main 35mm film camera, a 90's vintage Nikon N90S, works on my main digital rig, a mid-oughts vintage “prosumer” Nikon D40, except I lose auto-focus. My older, non-AF 50mm macro lens also fits on the D40, but I lose almost all features. I just focus and set the aperture manually on the lens, and get the exposure by trial and error, reviewing the picture after I shoot it. Nikon been fiddling with that formula a bit in recent years, but it's always been their thing. That is not the case with the other major pro company, Canon, who rendered their customers' very expensive lens collections obsolete when they switched to auto-focus.

2. 50mm fixed focal length lenses are some of the cheapest, fastest, sharpest, most versatile lenses in the world. It used to be the standard lens that came with all 35mm SLRs. On a 35mm camera, a 50mm lens is referred to as “normal”— meaning that, looking through the viewfinder, things are the same size as they are just looking with your eyes.

3. Lenses for 35mm cameras have a longer functional focal length when used on digital bodies. So, a 50mm lens used on my D40 body is functionally about the same as an 85mm— a short telephoto, basically a standard portrait lens— on my 35mm camera.


So, the cheap zoom lens that came with my Nikon D40, while very nice, is slow— the maximum aperture is f3.5 at wide angle, or f5.6 at telephoto, making it of limited value in low-light situations, while severely limiting selective focus as a creative option. Basically, the lower the lowest f-stop number a lens is capable of, the more useful the lens is in low light— you can have faster shutter speeds, making it easier to avoid blur from camera shake; and the more control you have over depth of field— you can have some things out of focus, if you want.

Usually you have something like this forced upon you; everything in the frame is basically in focus. We got lucky here, and the background is a little softer, so the picture isn't real unpleasant to look at. Often, everything will be in exquisitely sharp focus, which is dazzling to the eye, but expressively limiting. 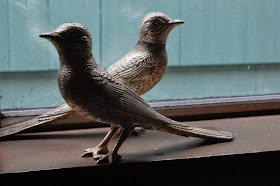 Here's the best you can usually do with the zoom lens that came with the camera; I was at least able to throw my neighbor's siding out of focus a little bit. Still, I had almost nothing to work with on my main little stage, with everything (including some mildewy gunk on my window I need to clean) except the distant background in sharp focus: 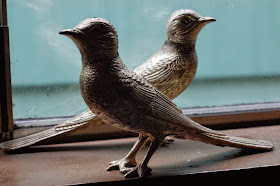 Shooting “wide open”, at f1.8, with my 50mm lens on the digital body, I have much more control. The front bird's face is in focus, but as you can see, the tail is not; that's a depth of about 1 inch that is in sharp focus: 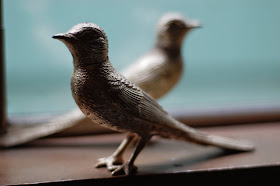 And of course, all three pictures were taken with the same 50mm/1.8 lens, so I can do all this, and anything in between.

The cost of 35mm gear seems to rebounded a bit after cratering a few years ago, but you can still get a bargain-grade 50mm/f1.8 AF lens for about $70 at keh.com. You can get a manual focus version for about $40. Since you lose auto-focus with these lenses anyway, the only additional feature you lose by getting the fully manual lens is automatic aperture control; with my AF lens, the camera still controls the exposure. But again, since you're shooting digital, and can look at your pictures as you shoot them, you're not losing much there.

And I should mention, if you're at all into photography, 35mm gear is so cheap that there is really no excuse for not having a film rig. It can be very hard to forgo the convenience of digital, but film really is a different, very special animal.
Todd Bishop at 11:17 AM
Share