Do your verry best

From Edward B. Straight's The Straight System, a drum method from 1922, here is a page of performance tips so you can thrive as a society/theater band drummer in the 1910s and 20s: 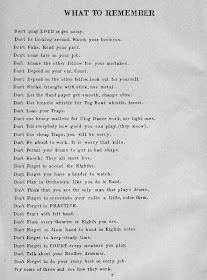 Some of those are still relevant today. It's sort of an interesting anthropological piece— it gives you an idea of the bad habits of the average working drummer of the era. Not to mention the negative phrasing—obviously of a moralistic time when people were constantly being berated about things they mustn't do. Straight doesn't get talked about much any more, but he's basically the father of modern drumming literature. His books anticipate by several decades things you see in Syncopation, Accents & Rebounds, and Master Studies.
Todd Bishop at 8:30 AM
Share