Are you getting to the point that you can work these up in a few days, and then retire them, yet? We've done a big pile of these POCs, but they cover a fairly narrow range of difficulty, and once you've sort of mastered one, the remainder should come quickly. Today's YAASE (Yet Another Afro 6/8) is at the harder end of the spectrum, somewhat, with a bass drum variation which I noticed creeping into my playing during the tour. I wrote this to get a little better command over it, and introduce the possibility of some different things happening with the left hand with it: 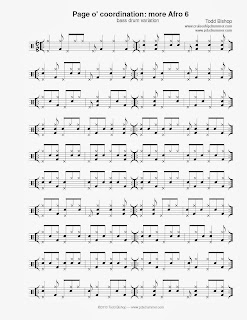 Here's the track I've been playing along with: