Let's consider this a special feature for the funds drive; like the other Zappa thing this week, I'll be taking it down in a few days and submitting it to Drum! Magazine, so get it while you can.

Rubber Shirt is an improvised duo by Terry Bozzio and bassist Patrick O'Hearn, from Frank Zappa's 1979 album Sheik Yerbouti. Aside from being great music, what's interesting about it is that, seemingly impossibly, it was created by putting together bass and drum tracks from different tunes, different sessions, and in different meters. Recording musicians who worry about loss of “chemistry” when overdubbing parts— even solos— take heed. Things tend to work together and make their own chemistry just because you put them together, and that's a beautiful thing.

The drum track is in 11/8, phrased as 4/4+3/8. There's one measure of 6/4, which is either a mistake by Bozzio, or part of the arrangement of whatever tune he was originally recording. I've forgotten O'Hearn's meter, and didn't have time to figure it out; you can get out your copies of The Real Frank Zappa Book if you want to look it up. 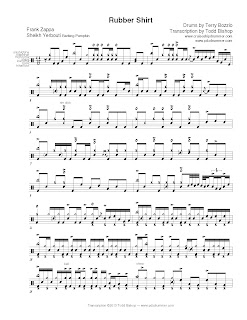 Bozzio is using his large Rototom drumset here; I think I've notated for five tom toms. If you don't have that many, it doesn't matter; just figure out a way to do it with what you do have. There are a few special licks which I haven't taken the time to make head or tail of— I just tried to get what I was hearing onto the paper in a realistic-seeming way; aside from being kind of fast, it may take a little analysis to make them work on the drums. Don't hesitate to make changes if what is on the paper is not playable.

Get the pdf [This was a special thing for the fund raiser, and the link is now dead. I'll announce when/if it will occur in print.]