Experimenting with a different kind of transcription here. Stevie Wonder's Superstition— from the album Talking Book, drums played by Wonder himself— is mainly a groove piece, but the groove is highly variable, and writing out any one measure of it wouldn't give you the full picture of what's going on. A full transcription would be better, except— even though I make a lot of them— I don't like actually working on things on the drums in that format. So what I've done is to break the recorded part down to a collection of one-measure patterns in 2/4— the song is in 4, but it is phrased pretty neatly in two-beat chunks. If you learn the entire page, you should be able to improvise a time feel very much like what is on the recording.

There are some interesting breaks throughout the piece, which I'll have for you another time. 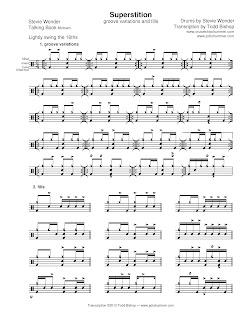 The 16th notes are lightly swung; play them almost with a sixtuplet feel, but not quite. On the groove section,  assume the snare is accented on beat 2, and apply the given accents to the hihat part; generally the cymbals will be slightly open for those notes. On the fill section, accents apply as written. There are a couple spots where you can assume an alternating sticking between the hihat and snare— mainly when there's a snare note on 2 without a hihat note (played with the hand).