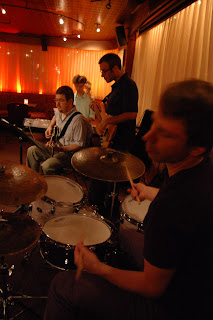 Here's a great piece on understanding the, well, near-dead state of live music in clubs (professionally, anyway), and what musicians can begin to do about the situation, by LA pianist Dave Goldberg.


AS I’VE BEEN LOOKING FOR GIGS LATELY, I’ve never seen so many free and low paying gigs. Well the economy is bad, so I can understand that a little bit. However, it is no longer good enough for the musician to be willing to perform for little compensation. Now we are expected to also be the venue’s promoter. The expectations are that the band will not only provide great music, but also bring lots of people to their venue. It is now the band’s responsibility to make this happen, not the club owner.

Just the other day I was told by someone who owned a wine bar that they really liked our music and would love for us to play at their place. She then told me the gig paid $75 for a trio. Now $75 used to be bad money per person, let alone $75 for the whole band. It had to be a joke, right? No she was serious. But it didn’t end there. She then informed us we had to bring 25 people minimum. Didn’t even offer us extra money if we brought 25 people. I would have laughed other than it’s not the first time I’ve gotten this proposal from club owners.

Much of the focus is on educating club owners, but musicians also need to internalize concepts like this:

He makes this important point, on something which has long baffled me about the expectation that musicians to bring their own personal flash mob to each and every gig:

When a venue opens it’s doors, it has to market itself. The club owner can’t expect people to just walk in the door. This has to be handled in a professional way. Do you really want to leave something so important up to a musician?

And even when an amateur group is able to pack the place with friends and family:

The crowd is following the band, not the venue. The next night you will have to start all over again. And the people that were starting to follow your venue, are now turned off because you just made them listen to a bad band. The goal should be to build a fan base of the venue. To get people that will trust that you will have good music in there every night. Instead you’ve soiled your reputation for a quick fix.

Every musician should read the entire piece and reorient their thinking about their relationship with clubs.