Once you get going on these, it's hard to stop. And it looks like I'll have to do one more, because in a near-inconceivable oversight, I left off my favorite one, by Tony Williams on Four and More. Anyhow, here are some more intros to the tune Four, by Miles Davis. Two of these are live performances with Jimmy Cobb, from 1960. The other is an earlier performance in the UK with Kenny Clarke, which I mentioned in our previous entry. 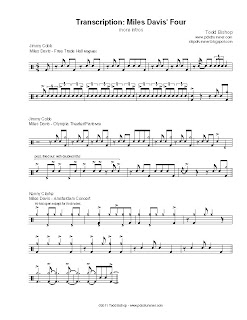