This is kind of a remarkable track by Andy Newmark, Anticipation by Carly Simon, one of the first and biggest hits he played on. It's an easy thing to dismiss- if you're over about 40 years old you've heard it on way too many gas station AM radios, and then on the Heinz ketchup commercial ad nauseum- but it's actually a serious piece of drumming, and music. It's worth giving this several close listens through along with the transcription. 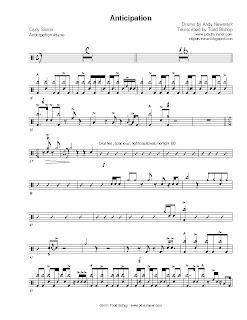 What's interesting about it- and what I'm noticing across the board as I get in and really study some of these 70's things- is the amount of shape and variety there is in the part. In fact "part" isn't the right word; it's a performance- it is obviously played very much in the moment, rather than crafted for the perfect choice of notes. The drums track the dynamics of the tune very sensitively, not only in volume but in content- which may not seem that big a deal, except it's nearly a constant thing- every single measure is different. The regularity that so much a feature of current pop drumming is basically absent.

Notes on the trancription and YouTube video of Anticipation by Carly Simon after the break:

The transcription presented some problems- the frequency of his cymbal is very close to the guitar's range, so it's some timesdifficult to tell which is which, and again, there is so much shape to his playing that at the lower end of the dynamic range things get lost. During the very soft second verse I had to just render the time as slash marks, and write in the fills- what is audible is too sketchy to make a usable transcription.

A couple of other notes- much of the riding is done on the crash cymbal (it sounds like a 16")- during those sections he tends to play 8th notes on the hi-hat with his foot; I've mostly left that out except where it's integral to the part. Also, I've accented more to give an idea of the shape than for absolute volume- accents are just louder than the surrounding notes. House top accents still universally mean a crash, and notes in parentheses are very soft. The 2 and 4 on the snare are always pretty strong.
Todd Bishop at 4:14 PM
Share