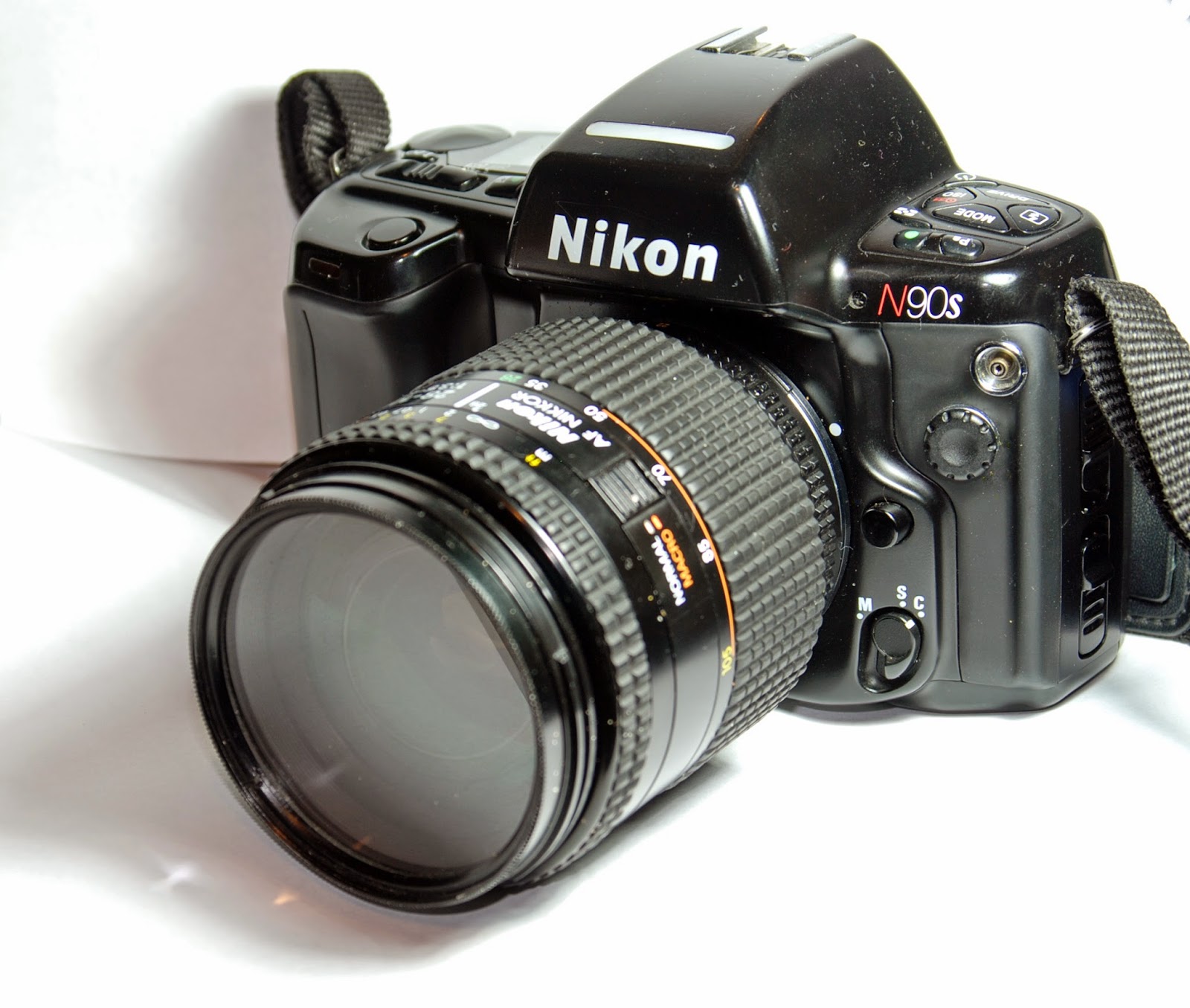 I want to say cheapest and best 35mm autofocus SLR, but my knowledgeable friends would no doubt descend and tear me apart like a Thanksgiving turkey on prom night. So let's say best "cheapest : best ratio"- the most camera you can get for the least amount of money. What I use is a 1990's Nikon N90S with a 28-85mm f3.5-4.5 AF zoom lens (as you may be aware, an SLR is a component camera- you need to purchase a body and a lens seperately). It's bulky and noisy, with questionable styling, and it takes gorgeous pictures. Though it was eclipsed by the F100 and is utterly out of favor now, in the '90's you would've seen a whole lot of pictures taken with an N90S if you looked at a little magazine I call National Geographic. The lens is an utter pig, and ancient- manufactured from 1986-99- but also happens to remain one of the best Nikon lenses of its class.

My reasons for choosing Nikon over the other brands were mainly: 1) their metering system, which makes getting an excellent exposure nearly idiot-proof- it's much smarter than most photographers. And 2) their lenses- with digital things have changed somewhat, but basically every Nikon lens works on every Nikon camera ever made. People also say they're the best lenses in the world, so there's that. Nikon is by no means the only option- Canon is reputed to have better autofocus, for example.

Here is what Ken Rockwell, internet Nikon guru has to say about the N90s and 28-85 AF:

The N90s is fast and sure. It only has one AF sensor, but a good one. The N90s feels like a 1980s camera with its liberal use of plastic, but has a tough stainless-steel lens mount and rugged internals. If the noisy AF motor bugs you, pop on a modern AF-S lens like the 24-70mm f/2.8 AF-S and it's silent.

The N90s has less developed ergonomics. It's the same as the N6006 and N8008. It can do everything you'll want it to do, but it won't always be as convenient as newer cameras, like the newer and much cheaper N75.[...]

Regardless of the slight clumsiness compared to 2008's best film cameras like the F6, the results from the N90s are spectacular. The N90s gives perfect focus, perfect exposure and perfect flash fill, all by magic. The N90s may look like a 1980's VCR on the outside, but hums like the Internet inside. It has superb 3D matrix metering, and better flash exposure than newer cameras.

As of 2008 you can get them used for a song. Since all film cameras are so cheap today, I'd get an F4 or F100 for not much more money, but if you run across an N90x, you could shoot it for the next 10 years and never worry.

What makes this ordinary lens so special? Simple: It's almost as sharp as the Nikkor AI-s manual focus fixed-focal length lenses it replaces, especially wide open where I often need to use it. It also autofocuses very accurately on my F100 without any of the sharpness-robbing errors I see with many of the newer designs. Therefore I actually get all the sharpness of which this lens is capable, unlike the others that may test well in some magazine's lab, but not focus quite right in the field on your AF camera.

It's a little larger and heavier (I measure 510g or 18 oz.) than the newer lenses. I suspect that's how it gets its superior performance; it's always easy to make a good lens if you don't have to make it small. It also doesn't try to do too much with a mere 3:1 zoom range. All else being equal, one always looses performance as one attempts to design a lens with a wider zoom range or smaller size.AF speed is about average to a little slower than average.


The lens also has a fun macro feature for taking pictures of little things- not as good as a real, dedicated macro lens, but fun to have.

You can currently get the body for $45 and the lens for $62 from the place you should buy all your gear, KEH.com. Their prices and service are outstanding, and their grading system for used gear is very conservative- "BARGAIN" grade items are true bargains, being varying degrees of used-looking, but 100% functional- much nicer than the site's dire-sounding explanation makes them sound. If you want to take Rockwell's suggestion and get an F4 or F100, they will cost you at least $100 more.

If you want a flash, the similar-vintage SB-26 speed light is excellent, and reasonably priced.
Todd Bishop at 9:37 AM
Share