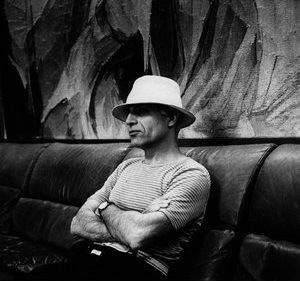 This is another old favorite of mine that's just been floating around the Internet- you kind of have to look for it to find it- a 1996 Paul Motian interview by Chuck Braman. Not a lot of what you call deep reflection- Motian seems to be a pretty direct cat- but that seems to be the lesson itself. I've excerpted my favorite parts, of which there are many. In the first part he talks about his influences and early career, up to the 1960's:

WHY HE LIKED MAX:
Chuck: What was it about Max Roach in particular that attracted you to his playing?

Paul: He was more into the Bebop. I was going to say jazz, but you can't say jazz because you'd have to put Buddy Rich and Gene Krupa in that too, you know? And of course I liked them too, but Max was the one that stood out to me. And also, I was never really a Buddy Rich fan, I must say.

Paul: Because to me that was more technical. I mean, I admired it and I respected it, he was a great technician and played great. Even today, you listen to some of that stuff he played with Art Tatum and Charlie Parker, some of that shit's great, man. It's really good. But somehow Max stood out more to me. Just from the sound and the rhythmical patterns and what came out from him was somehow more hip than the other shit.

Chuck: Some of your early recordings also remind me of Philly Joe Jones.

Paul: Sure. Philly, and Kenny Clarke, those were my people, but at this point Art Blakey is high up on that list, man. I listened to him too, you know, but my playing, listening to it now, came more from Max.


Chuck: Would you say that Max Roach, Kenny Clarke and Philly Joe Jones were your three favorite players when you were coming up?

Paul: Yeah, pretty much. But I hadn't heard very much of Chick Webb or Baby Dodds or Sid Catlett, who I'm sure I would have influenced me if I'd heard them then. But Max was pretty much one of the first influences, because I used to hear Max when I was still in High School and I used to hear jazz broadcasts on the radio from New York. As a matter of fact I remember sending away for records that had Max on it, 78 [RPM] records, got 'em through the mail. They advertise on the radio and I'd send for it. Or Kenny Clarke. This was pretty early.

KENNY CLARKE:
Chuck: How about Kenny Clarke? What did you like about him?

Paul: Some of the early shit I heard from him was with the Modern Jazz Quartet. Something about his thing was a little more not-so-correct, like Max. (laughs) You know what I mean? That was hip too, but in a different way. You have to remember that Kenny Clarke was before Max Roach. I guess Kenny Clarke, it was something about the swinging way he played brushes on the snare drum at such fast tempos, and the fact that he seemed to get so much out of so little drums. That's what got to me about Kenny Clarke.

Chuck: How about Philly Joe Jones?

Paul: Philly Joe was kind of hip in another way. The Philly Joe that I remember that I heard was with the Miles Davis Quintet. His playing was kind of ultra-hip with that quintet. The thing about Philly Joe's playing was that somehow his ideas and his phrasing, when he soloed and played fours and eights, you really knew where he was in the tune. So I learned from that.

LEARNING THE TRADITION:
Chuck: There's a philosophy prevalent now where younger players are placing a lot of importance on learning the styles of older musicians. I was wondering what your opinion is regarding that, because it sounds like at the time you were a younger player, you also studied the guys that came before you and learned their styles thoroughly…

Chuck: … and I was wondering what you thought of that whole philosophy, of the importance of learning tradition.

Paul: Well, I heard people say be your own person, or don't listen to anyone else and do your own shit. I guess there's something to say for that, but I think that basically you have to go back, you have to listen to the masters and the tradition first, then develop your own stuff, come out of that and then be your own self. No way should you dismiss that. That's how I learned, from listening to other people, people that I liked. Like when I heard Kenny Clarke on record, I loved what he was doing, you know? And you try to play like that until you get your own shit together, and then it becomes part of you hopefully, but then your own self comes out on top.

I ran across Gil Evans in Central Park one day, and the conversation got into this thing about studying and learning, and he said that if you hear something that interests you, you'll try to figure it out. In other words he was saying, like, let's say I heard a Duke Ellington tune, and it was arranged or had a certain sound that intrigued me enough that I wanted to find out what it was, so then I would learn how to do it myself.

THROWING JAZZ BACK TO THE 50'S:
Chuck: What do you think of the trend toward de-evolution in jazz in the past 15 years: younger musicians going back to standards and playing and dressing as musicians did in the '40s, '50s and '60s?
Paul: Maybe that's what has to happen before it picks up again and starts going in the right direction, you know? Because, I mean, Coleman Hawkins ain't around, you know, to name one (laughs), Art Blakey's not around, Miles Davis ain't even here anymore (laughs). I mean, first of all, think about all the great players that happened to be around at the same time. I mean, just take a year, like 1950. You got Louie Armstrong. You got Duke Ellington. You got Miles. You got Sonny Rollins. You got Coleman Hawkins. I mean, you got Jack Teagarden! And it's all sort of within this one bubble, all of these great people, all at the same fuckin' time, man! Is there going to be any time in the future when that's going to be happening again? I don't think so, man. So maybe it has to go back to square one and start all over (laughs). Who knows? I don't know.

Also now there's a lot of other kinds of music around that wasn't around then. You know? Like, there was no fusion at that time. There was no rap. There was no rock and roll. Maybe you had rhythm and blues…
Chuck: But what's your assessment of that kind of music?
Paul: Ah, it sucks! (laughter) But, I mean, I'm only one person, man.

In 1940, jazz was the popular music of the day. When I was in high school and I went out to hear music, most of the stuff I heard was big band stuff. I was in high school between 1946, '47, '48. I went to ballrooms, not nightclubs. Bands were playing for dancing but I was in the front row there listening to the music with a bunch of other people who were into the music. That was the popular music of the day, man. It's not today! So I think that has a lot to do with what's going down.

HARD BOP TO MODERN:
Chuck: Listening to your recordings, it sounds like your own style developed very rapidly between 1960 and 1964.

Paul: I think that probably started with Bill Evans and Scott LaFaro. I think that trio triggered it, because all of a sudden the music was different, it wasn't piano in front with rhythm section accompaniment, or a group with the bass and drums always the anchor, playing the time, and other people playing on top of that shit. All of a sudden it changed with Bill, because of the way Bill played and the way Scott LaFaro played. The very first time I played with Scott LaFaro I had a hard time, man. It was hard, you know? I said "hey, wait a minute man, this is a little different," so I wanted to get inside of that, and by doing that, then that trio became one voice. This was the first time that this kind of shit was happening. It wasn't happening before Bill and that trio, you know? So that trio kind of started that kind of shit.

You might get an argument with that. Other people may say, "Well, I started it," or someone else did. But for me, that's when my playing started to change.

Then all of a sudden I got turned on to Paul Bley, and in the '60s shit started changing and started becoming a lot more free kind of playing, and I got involved in that, and that also started changing me more and more until, you know, it just kept growing in that direction.

Chuck: Did you have some sort of a revelation at some point during that period?

Chuck: It was gradual.

Chuck: And it was reacting to the people you were playing with.

Chuck: Do you think if you didn't hook up with Evans your whole personality might have taken a different direction?

Paul: Maybe, maybe. Well no, I don't think so, because eventually I would have hooked up with Paul Bley (laughs). Because in the '60s there was a lot of shit goin' on, and I wanted to be part of that. That was one of my main reasons why I quit Bill Evans in the first place. I mean, playin' with Bill at that time out in California at Shelly's Mann-hole, I thought the music sucked, man. It wasn't happening for me. These cats had me playin so soft, I said "man, well what am I doing here?" Meanwhile back in New York there's all this great shit going on. So I said "Hey Bill, later man, this is not happening for me anymore." He begged me not to leave him, especially on the road like that, it's a terrible thing to do. I wouldn't want anybody to do that to me. But man, I had to leave. I left.

I know myself, man, I know that I'm not goin' to sit still for nothin', even today, I'm going to look for a creative way of playing, man, something that I'm going to feel is musical, so even if that hadn't happened, I'm sure that I would have done something else. I wouldn't have stayed in one place.

Read the entire interview.
Todd Bishop at 11:58 AM
Share