UPDATE: I have extreme quality readers. Jim in the comments pointed out a bunch of errors in this, and figured out the insane Mystery Lick on the second page. The corrected pdf is up now.

New Arrival is a tune by Nat Adderley, from the record Introducing Nat Adderley, that heavily features Roy Haynes on the drums. He's got a long intro, a solo, some fours, and then a solo break on the head out. It's a nice tight little nightclub arrangement. Haynes is in full blown “snap crackle” mode, and everything is very hip, very slick, very tidy. Except one thing in the middle of the solo where I needed some help from the community (see above) to figure it out. 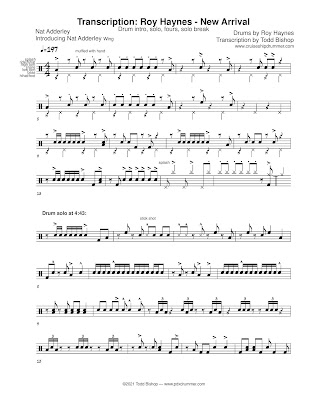 Most of the running 8th notes are played straight, non-swinging; the syncopated rhythms swing. There are a few spots where both hands are played in unison on the snare and tom, which may not be happening in actuality— there's a lot of sympathetic vibration from the snares, and it can be difficult to tell. None of that is difficult to play, so no harm if the way I wrote it is wrong. He uses a splash cymbal, and there are a few special articulations— at the beginning he muffles the snare drum with his hand, later on there are some cymbal chokes, and pitch bends on the tom toms. He does feather the bass drum sometimes, but it's not really in time.

Blogger is being a pain about letting me embed video, so listen here if this record isn't already in your collection.
Todd Bishop at 1:18 PM
Share