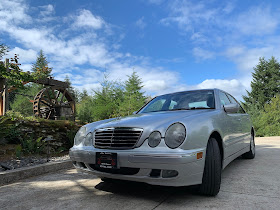 After my pathetic little beater of a car bit the dust a few weeks ago I replaced it with a dynamite $5500 20 year old Mercedes-Benz E320— the last of the bombproof Benzes— with an actual CD player, with Bose speakers. The most I've ever paid for a car, and the first car I've ever owned that was manufactured in this century. This is my second Mercedes, and the key to owning a car like that is finding a mechanic who loves the cars and knows how to find parts, who can get you out of there without completely savaging you financially. You also have to find a solid car to begin with. Fortunately most Benz first owners take good care of them. The pre-purchase inspection on this one was a work of art.

So I'll be buying CDs again after some years of mostly buying vinyl— and living in internet false-abundance/everything's free/here's more music than you could ever digest in a lifetime-land. I have a few choice items in the car right now:

Here are a few things on my list to get, again— either I have them on vinyl already, or I was too cool to take care of my CDs in the past and they're all gakked up. These all befit the dignity of this machine. You want to feel like you're cruising La Grande Corniche even when you're inching along I-5 during other people's rush hour.

The car seems to want live double albums— that are well recorded, where everyone's in the zone and letting it all hang out:

What's your driving music, or favorite killer live albums with a vibe? Answer in the comments...