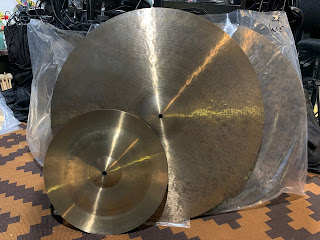 CYMBALISTIC: I payed a brief visit to Cymbal & Gong HQ (aka Tim's house) the other day, and he had a few interesting things around:

They're making 26" Holy Grail rides now. I got an inquiry about them earlier this year, and the answer was that the shop's equipment wasn't big enough to handle that, but apparently they're getting blanks from another shop.

There are several on hand available for purchase right now, but I imagine they'll only be getting them on a special order basis going forward. Price is in the range of $600. Expect to pay extra shipping, and about a 12 week wait time once these initial few are sold.

Here's Tim demonstrating one— taken on an iPhone. Actual measurement is 25.5", as it says. I believe this one is going to the drummer in the Sun Ra Arkestra.

They're also making some more swish cymbals. I have one of the initial batch of prototypes, which is a very thin 20", our friend Michael Griener in Berlin has another, which was cut up and riveted to copy the famous Dizzy Gillespie cymbal. Tim showed me a 14" and a 16" that are going to a Dixieland drummer somewhere. They're very thin— they open up and give you a real Chinese accent sound just touching them:

So many modern Chinese-type cymbals just give you an offensive GAAA sound when you crash them— that's not what we want.

He had some other items similar to an Agop trash hit, and smaller cup chime like cymbals— basically a bell with an upturned edge, with a slightly exotic sound, and a partially unlathed finish, sizes around 5-10".