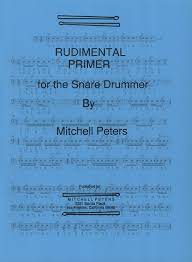 Mitchell Peters is becoming the guy for snare drum literature, for me— his books form a thorough and complete vocabulary for the snare drum as it is played in the real world. They're adequately challenging for most players, but they never get into the technical/reading absurdity we get from some other authors. All together they're cleanest presentation of the core craft of snare drumming I've found.
Peters is well known in conservatory percussion, but his books are somewhat low profile in the broader drumming world— they're published by the Professional Drum Shop in Los Angeles, which is not super aggressive about promoting them.

Rudimental Primer seems like a rudimental book for the non-rudimental world— concert percussion and drumset musicians. It covers all 40 of the Percussive Arts Society's list of international drum rudiments. Each rudiment gets two dedicated, very dense pages, with some preparatory studies for learning the the basic movements, and a number of short exercises in different rhythms and meters, plus a few short solo etudes. This is the real format for learning rudiments— not simply playing the through the PAS list.

The solos are quasi-traditional, not unlike those in Haskell Harr. But these don't have that general stink of tradition. Everything in them is there for a reason. It's a modern book, and he includes solos in non-traditional meters, like 3/4 and 5/8. Peters generally doesn't try to do the teacher's job in the text— this book, like his others, is virtually 100% music. There are no hand movements (upstrokes and downstrokes) or dynamics marked in, apart from the stickings and accents. It's a book for the practice room— you could practice for half an hour without turning a page. Nothing needs to be filtered.

Haskell Harr's and Charley Wilcoxon's books are my other most frequently used rudimental books, but they each have their drawbacks. The Buddy Rich rudiment book, which I never use, is not terrible, but it's overloaded with extraneous stuff, short on studies preparing for and developing many rudiments. Corps people will want to use a book with drumline-type hand motions written in, like Matt Savage's Rudimental Workshop.

Rudimental Primer is a serious practice book for mature players and teachers, who know how the fundamentals of do this stuff, and how to teach teach it; and for pretty serious students— teenagers and up— who need to learn the rudiments.

Advanced Snare Drum Studies (though I don't use it much)

All are available from Steve Weiss Music, and from the Pro Drum Shop.