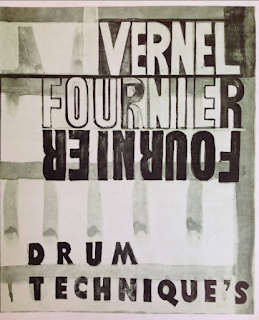 I found some interesting things on one of those shady pdf download sites— a couple of rare books, and very old versions of a couple of unusual books. Worth getting if you're into that sort of thing:

A 1963 version of Marvin Dahlgren's Drum Set Control with the layout done on a typewriter. For awhile this book (and a lot of other of Dahlgren's books) was available on Ron Keezer's Really Good Music Publishing site, but Ron passed away last year and the site has been down. I need to write to his son Geoff Keezer and find out what's the status of that company, and if the books can still be gotten.

An old version of Vernel Fournier's Drum Techniques— or Drum Technique's, as it is written on the hand drawn cover. Doesn't include the Poinciana transcription that is in the current published version.

Handwritten, hand-stapled version of John Lombardo's Rockin' Bass Drum. It's a good old rock book, probably better than Funky Primer, except for the archaic style of notation. It's still usable. And this version looks cool.

Fred Albright's Rhythmic Analysis for the Snare Drum. I believe this is completely out of print. Maybe it's an early version of his Polyrhythmic Studies for Snare Drum, I don't know— I don't own that book. Includes a good, very extensive explanation of polyrhythms, and a lot of very challenging snare drum solos, some including a bass drum part, a la Reed.

I don't know why these pdfs are only on this site. Someone must have scanned his dad's/grampaw's drum book collection and uploaded it. Grab them fast, who knows how long this site will remain in existence. Let everyone know in the comments if you find anything else interesting.