Here's that Jack Dejohnette transcription I mentioned yesterday— on the intro of Directions, from Miles Davis Live at the Fillmore East - It's About Time.

The 8th note quintuplets I mentioned happen right up front, when he's playing half-free, not quite settled on the main groove. It's possible he worked out the 5s, or maybe he's thinking something else and is just pushing the rhythm around, a la yesterday's post.

The transcription begins at 0:38 in the recording. 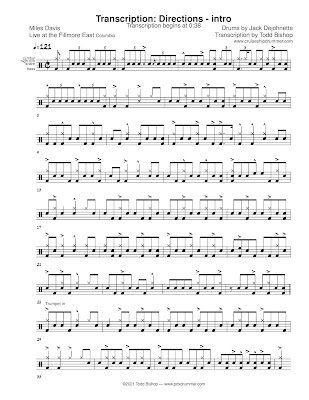 All of the squirrelly stuff happens in the first four bars; after that he's in the main groove for the tune. It's mostly straightforward “non-independent” drumming, not unlike what we saw on another recent Dejohnette transcription. The simplest formula for doing that kind of thing is to play a Stone-type sticking pattern, with the RH on the cymbal (with bass drum in unison), LH on the snare. Here the snare drum is a little more active, and sometimes overlaps with the RH/cymbal part. And he doesn't play the cymbal on all of the bass drum hits. It would be easy to make some kind of formula to do that— and I probably will— or you can just do the Stick Control type thing a lot and play around with it, which is probably what Dejohnette did.

I just made a label non-independent drumming, which is so far only attached to this post. If you dig around in the posts under the ECM label, you'll find most of what will eventually get that new label.