This is not a follow up to my death post. You'd have to have some kind of sick mind to post this and immediately die. It would be funny, but... no. Come on.
Let's talk about the “ba-dum tss” style rim shot— that's how I know them: “rim shots”— for a comedian or entertainer, or the odd musical/dinner theater setting. It has become a full blown internet meme, so people are probably going to be working it into all kinds of lame acts, and you may have to actually do it in public sometime. I've had to a few times in the course of working cruise ships. Even if the performers or the material were hacky, there was always a level of professionalism— so I'm talking about doing it during an actual act, not just to screw around when the singer says something dumb. God help you if you get stuck doing it at the Firestone company picnic talent show or something— that's a  situation you cannot rescue. Anyway, let's talk about doing it and not sucking.
First, you don't have to play “ba-dum tss.” You shouldn't play ba-dum tss. It's so obvious it will probably be interpreted as sarcastic, like you're inviting people to laugh at the comedian for sucking. That's not good. We don't need to do this at grandma or pre-school level. Usually all that is needed is a quick punctuation in one or two notes. You can be more interactive by listening to the joke and playing something appropriate for the rhythm or the subject. Not unlike what's happening here:
That's all worked out to correspond with the physical comedy, and normally you wouldn't go that long, but that's the basic idea. There should be some energy and variety. Though on one particularly awful show I played, there was a segment with several cast members telling rapid fire horrible hillbilly jokes, and after each punch line, one of them would hit a cowbell. It was actually effective, in a Pavlovian kind of way, and it became kind of funny.

Here are some examples of things to play— those can go on any drum with any sticking you want, where applicable: 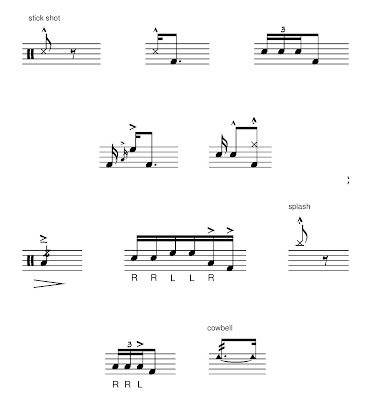 Or whatever. I thought about it for five minutes. Think 1-5 notes, played fast.
There becomes a little bit of a free jazz element to it, where you're winging translating a comic punchline into drumming language. On one show there was a joke about giving a mule a pill by blowing it through a tube— the punchline was “not if the mule blows first”, and I did a buzz stroke on the floor tom with a mallet. Reminiscent of a mule surprising you by blowing the pill back in your mouth. That was about the level I achieved on the whole sketch. You can use any unusual sounds you have on hand for variety— splash cymbal, cowbell, ratchet, bird whistle, whatever. It would have to be a pretty cornball show to get into too much of that.
Some rules:
Schticky hack comedy doesn't need to suck completely. Embrace it a little bit for what it is, when forced to do it. See it as a link to our vaudevillian past.
Todd Bishop at 3:51 PM
Share