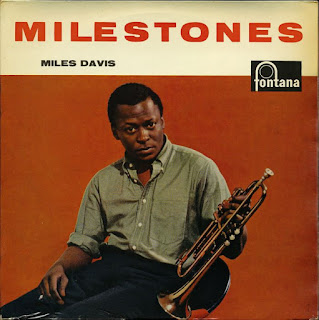 Yer Three Bloggers— myself, Ted Warren @ Trap'd, and Jon McCaslin @ Four On The Floor— decided to listen to Milestones by Miles Davis, and make whatever comments occur to us. It's one of his most famous albums, and was considered by Tony Williams to be the definitive jazz album of the universe. I listened to it a lot in college— I think I really didn't get it then— up through the 90s. It's been awhile since I've listened to it all the way through.

Mind you, I feel like a jerk writing about this record. I don't want to give my opinions on it, I want to hear what other people have to say about it. If I was talking to one of those people, all of the comments below would be phrased in the form of questions.

Dr. Jackle (née Jekyll)
Barn burning show number, tempo ~ half note = 168. Lots of trading happening. Working on a Carnival boat gig in 1990 I remember my friend (not a big jazz musician) laughing over the rapid fire trading between Coltrane and Cannonball. It is good for jazz musicians, or anyone playing very active music, to know how their music sounds to ordinary people. A little foreshadowing of the burning tempos on Four & More, and Miles plays the drum solo cue we hear a lot of on the live records with Tony Williams. Red Garland acts as tour guide. Great high energy solo and breaks from Philly Joe.

Miles's solo here is like classical music, almost as much as the So What solo.

Sid's Ahead
Strange energy here, like a bomb's about to go off, maybe, but we don't know when, or who set it. Tune is an odd little paraphrasis of Walkin'. Massive forward energy to this medium slow blues (~110bpm)— playing wise, groove wise, history of jazz wise. Coltrane sounds like he beamed in from another world. Note Philly Joe double timing the hihat sometimes, and playing a dotted-8th/16th rhythm on the cymbal, but he's not playing particularly 16th note-y on the snare drum. Rhythm section cruising, especially during Miles's solo where there's no piano, little comping. Joe is relentless. I imagine myself playing this and getting really antsy to make it “go somewhere.”

Groove with this band is always a little mysterious to me— there's big air between Joe and Chambers. It's like a groove cloud at times. The rhythm section are all playing groove, but they're not all attacking the beat in the same place. Compare the feel to something else we heard recently, where everyone is chonk chonk chonk right on it.

Great solos. So much intelligence on this record. We're used to hearing intelligence now, but this is something else. Makes a lot of other stuff just sound glib.

Two Bass Hit
Another show arrangement, featuring the drums on the head. Joe generates massive energy through the head just with one hand on the snare drum. This record seems to be retiring the whole bebop era. It's a feeling. Somehow reminds of Mingus's band for pure cohesion— Red Garland and Joe together are tight as hell. After listening to a lot of him for my recent Philly Joe post... his playing on this record is a whole different level above— massive intensity, pure focus and confidence.

Do you get the feeling that people need to arrange more? With the idea of hooking the audience's attention. It's easy to just play in jam session mode, but people want to hear things that are particular and hip. I'm not even sure how important the blowing is when the arrangement is this killing.

Normally I don't want to hear a lot of snare drum, but Joe takes this out in a great way with it. The whole record is like that.

Milestones
Modal jazz was created with this tune of course. More classical music from Cannonball on his solo— could the solos ever not lead off that way? The rhythm section just grooves on this— I'd be interested to find out if and how that choice was related to the new kind of harmonic structure. Certainly the 60s group took a lot more freedom from that.

Billy Boy
Ahmad Jamal style trio show number. Extremely hip, and absolutely the literal holy text of the brushes, even though he just plays them on the head in and out. Very polished change from brushes to sticks going into Red's solo, and back to brushes on the head out. Joe plays both feet in unison(***) while changing from sticks back to brushes in the third and fourth measures of the head out. It's funny, you can still hear this in the music of much later, very different people like Michel Camilo in this.

More great trading with Joe on this. What do you say about that? It's over there, on the record.

Straight, No Chaser
I listened to this track a lot in college, and I don't think I ever realized how futuristic this record is. This was just bebop to me, and I missed some important fundamentals for that reason. The lessons here are not obvious to a kid. I probably should have listened to more ordinary records, and given them more credit for being good, too.

Cannonball's hip harmony part on the head is what I'm saying about arranging. If jazz has hooks the way pop music does, it's in things like that— in not doing things— composing, playing and arranging— generically. There's a modern mentality that's very fixated on the concept of genre, but nothing good is generic. There's no other tune “like” Straight, No Chaser; if you search Netflix you'll find there's no other movie “like” Mean Streets, no matter what their search engine claims. Try to find another song like Happy Together. Great things are particular.

And with that, I can now go learn a lot of things reading what Jon and Ted wrote. Stay tuned for the next Three Bloggers post, whatever that will be. If you have any requested topics about which you'd like to hear from all three of us, by all means leave them in the comments, or email us.