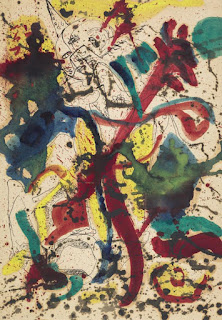 “The way I work is totally accidental.”
- Francis Bacon, painter

This is a big thing in my teaching: you're playing along, working on a thing, and you play something you didn't mean to play— whatever pattern you're working on, that wasn't it. But what you did play sounded fine on its own. It was in time, you kept going, you didn't get lost, and anybody listening wouldn't know there was anything wrong.

What actually happened was you got a free variation. You got some free drumming you didn't even have to practice. If you handle it the right way, and continue playing, and don't stop for the mistake. A lot of learning to play the drums is just learning to continue.

Most students students will stop when that happens— they'll try to “go back” and get the prescribed pre-conceived pattern right. Obviously time doesn't work that way, and playing doesn't work that way— what you wanted to play, but didn't, is not a factor. What you did play is what is the music.

A lot of making mistakes is just what is called improvising. Improvising, to an extent, comes from mistake-land, from the place of not knowing what you're doing.

The hidden assumption is that there's something you're supposed to be doing— some “part” handed down by the Father God, who's going to know if you sinned against him by screwing it up. For being such an allegedly freedom-oriented society, there's an American authoritarianism that really beats people down from saying anything on their own. We're belligerently free, and at the same time, we are pure maggots unworthy to play anything of our own— unless we were “chosen” by being anointed with commercial success. Otherwise everything's got to be approved as either being a “part” to a song or something found in a book somewhere. It's a common mentality.

For drummers, real mistakes are mostly not “wrong notes”, but process errors:

You stopped. Always keep playing. You can't change what you did, you have to continue

The beat got turned around and you kept it there for a long time. Maybe it was you, or maybe it was someone else, but the longer it stays turned around, the more everyone assumes it was your fault. You can try to hide it by playing more ambiguously— break up the cymbal rhythm, stop playing the hihat. Play 3/4 (not too forcefully) until you get reoriented. It's a good exercise to practice turning the beat around— while playing normal jazz time, forcefully count “1, 3” along with the hihat, until you hear the hihat on 1 and 3, and then correct it so the hihat is on the new, turned around 2 & 4.  Repeat until you can do it quickly.

The time sped up— maybe you listened too closely to the guitarist. You can ease it back at the beginning of the next solo. If you memorized the sound of the count off, so you have some reference point for correcting it.  This is a pretty normal type of flexing you'll sometimes hear on records— different tempos for different soloists.


If you played the arrangement wrong. OK, there's a “wrong note”— you were supposed to do something specific, and you did it wrong. Usually you can just play through. You can play time or background texture while other people are playing a figure, or play a fill where the rest of the group played a break. You have to engage it musically even as you're playing nothing but wrong stuff according to the arrangement.

You got lost in the form on your own solo. Just take your best guess and keep going. Go back to playing time in the last 8 bars, wherever you put them, and give people an extra-clear cue for their entrance at the end of your solo. Most of the band is not listening, or can be fooled into thinking they were the ones who got lost.


Hiccups in the time. If you play without thinking, strictly off a physical or emotional flow, or strictly following your ears, at times there will be a hiccup in your flow, and the time evaporates. It just goes away, and you experience an odd unmetered break. You just have to jump back in as best you can. People want to play “without thinking”, but really what we want is effortless awareness. The better your awareness, the less things like this happen.

There are other mistakes, along similar lines: playing sloppy in an unpleasing/ineffective way, playing inappropriate dynamics, errors of taste, playing grossly wrong for the style, dropping a stick. The point is, the answer is always continue. Keep playing.