I'm finally half done with this. This project is definitely streamlining my transcription methods. I use the program Transcribe, and loop two measures at a time, usually starting with the playback speed at 75%. Everything is basically audible on this track, and I haven't had to mess with the EQ.

Because I'm using Finale, I first sketch in the combined rhythm for the full drum set— I'll put in the first sound I hear on every note of the combined rhythm. Cymbal, snare, whatever. Then I'll use the speedy entry tool to fill in everything else that's happening in the measure, using the keyboard. It's a pain poking around adding a lot of notes with the mouse. Then I add all of the articulations— accents, ghost notes, open hihat and whatnot. Finally, once I've completed a twelve measure chorus, I'll go back and loop the entire chorus and listen for mistakes in all four parts— cymbal, snare, bass, hihat. It's easy to miss things at the beginning/end of each two measure portion you looped.

So here is part 7, minutes 7:00-8:10, the 37th-42nd choruses of Elvin Jones playing Chasin' the Trane, from John Coltrane Live at the Village Vanguard: 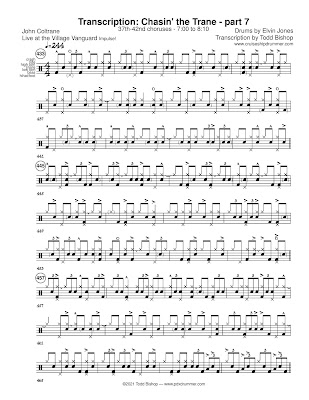 Things are getting slightly wilder; there are a couple of big fills, and a couple big accent passages. We're seeing more tied notes on the cymbals, more activity with unisons between the snare and bass, more multiple triplet rate notes played with the left hand. That thing with the bass drum in the middle of the triplet was no fluke, because we see it several times here. Lots of hihat on the & of 1/3, as well. Often the execution of those is slightly fluffy, with the hihat slightly late, so it's landing between the & and the following downbeat. I hope it's obvious what to do with the big 16th note fill in the second page— you don't play exactly what I wrote, you play the idea. Obviously he's playing in a kinetic kind of way, and every single note of the idea didn't connect with the drums.

Through all of this the tempo is holding steady— maybe it picked up a few BPM, or maybe it's just a sampling error. I'm just letting the software tell me the tempo, based on my markers.