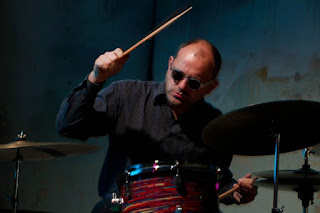 Here's a forum comment by our friend Michael Griener in Berlin, which I wanted to preserve on this site. Michael is an excellent, very active drummer in Germany and throughout Central Europe, in jazz and avante-garde music, and also an active teacher in Berlin and Dresden. He's also been a big supporter of Cymbal & Gong cymbals, and very helpful in getting the cymbals to Germany. Michael has several Cymbal & Gong Mersey Beat and Leon Collection cymbals.

UPDATE: I posted some video of Michael playing on Cymbalistic.

Here he gives his personal journey with stick selection, and how it reflects performance concerns and cymbal selection for jazz drummers. I recognize a lot of my own experiences here, except I never settled on an acceptable solution on my own. The comment is in context of a conversation about looking for a jazz stick other than the very common choice, the Vic Firth SD-4 Combo.

I used to play Maple sticks for years, although I went for SD2 (Bolero style) instead of SD4 Combo. I ended up with the now discontinued Gregg Field [coincidentally, my old teacher at USC- tb] endorser model, which was a maple stick in between a SD2 and a SD4. But as nice as Maple sticks feel, those sticks tend to make a darker sound which is pleasant for you as a drummer listening to yourself, but the cymbals tend to get buried in the mix.

The Bopworks Birdland model [one of Michael's favored models] was built after an old Roy Haynes model, and all the older sticks I came across had a long taper which was the reason why sticks started to break after drummers had to match their volume with amplified instruments.

So stick design changed in the early seventies. I think Pro Mark was the first company to make their sticks thicker around the taper, but that threw off the balance of the sticks. Drummers had to work harder to play a fast ride pattern and played louder as a consequence.

I found that drummers with bigger sticks (more mass, not necessarily more weight) tend to play louder and overpower thin jazz ride cymbals. That's probably one reason for those unlathed cymbals came into fashion a couple of years ago since you can't overpower them. They have an in-built limiter and my students used to like them when they weren't able to control a cymbal.

When I met with Pete La Roca, he used small Regal Tip 7A's with nylon tips, because he wanted his cymbals to get heard without overplaying.

I had Frank Kincel of LA Backbeat make me a special stick model which is .505 thick with a very long taper and I haven't broken one of them yet. Great sticks, especially for piano trios.

When I need a bit more beef, I use LA Backbeat's JBX 535 (J=Jazz= lighter wood, B=Bounce= longer taper, X=extra length=16"), but then I usually play with acoustic instruments only. But with those sticks I can control lighter cymbals and don't need to hold back.

I want a clear sound to make my time be heard in the band. I never could understand why people liked nylon tips at all, but now that I don't break sticks anymore the wooden tips wear off after some months. I now use clear finger nail hardener to convert my worn tips into nylon tips temporarily, but that needs to be redone every couple of weeks. The only problem is that my sticks now last so long that I'm afraid my favorite stick companies will go out of business since I'm not buying enough.

So, people, please seek out people like Frank Kincel of LA Backbeat and Chris Bennett of Bopworks and buy their sticks! Keep them going!

Todd again: See also my jazz stick roundup and Bopworks stick reviews. To get a further idea of why the Bopworks sticks are special, also see this interview with Chris Bennett, shared with me by Michael.