Something released in a year starting with a 2, for once. Here Bill Stewart solos during James, from Pat Metheny's Trio - Live record. Stewart is a few months older than me, and is sort of the archetypal drummer artist of my generation. I first heard him on John Scofield's Meant To Be in 1991, and it was instantly obvious that he was doing something fresh and extra-musical. It's routine now for drummers to sound like him, with that pretty tom tom sound. 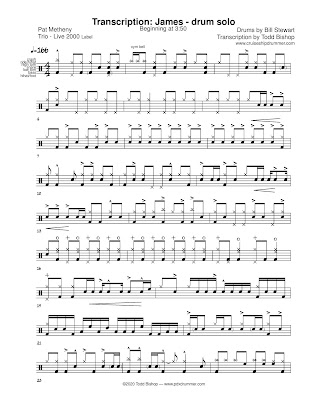 The solo begins at 3:50, the tempo is quarter note = 166— on the real scale of tempos, that's pretty bright to be double timing, playing 16th notes. I'll talk about what I mean by that another time.

It's mostly 8th notes, and he mostly stays on the cymbal and snare drum. There are some open drags with the left hand— that's the occasional 16th notes you see— and a big 16th note lick near the end of the first page. He plays his one note on the third tom tom on that. There's a passage of 16th notes in the second page, too— notice he repeats the same idea in measures 30, 31, and 33. Plus a BSSB pattern with a cymbal on the first note.

He uses that pattern repeatedly. As I do— it's extremely useful and sounds cool— it's good to get very friendly with it. Let's credit Elvin Jones for originating that one.

The open hihat lick in the middle of the first page is questionable. I've written it as if he plays the open notes with his left hand, but he could be splashing it with his foot. If that's the case it's a pretty developed technique, which you'll need to spend some time with.