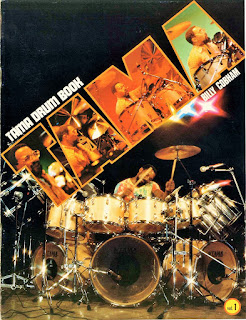 I was working on this post about Billy Cobham some weeks ago, and felt I couldn't finish it—  it's not that easy to write a complete portrait of the playing of a great drummer. Try it sometime. But this should be interesting to read in light of my recent thing on Rufus Jones. Take it as a starting place for thinking about what you're hearing when listening to him.

Billy Cobham is one of the most recorded and talked about drummers of the first part of the fusion era— from roughly 1970 to 1980. He was on a lot of records, and made a huge splash playing a large drum set in a really exciting way. He took drumming chops to a new level— maybe not exceeding Buddy Rich, but using more modern drumming language than Buddy. He was involved with a number of technical innovations expanding the concept of the drum set as an instrument. He was the first major player to play the drums “open handed”, that I know of.

He's probably the most effective player of a large drum set ever. Neil Peart, a totally different type of player, would be another example of that. With so many tom toms, he can do some pianistic lines not really possible on normal sets, that I haven't really heard from other large-set players. The modern, fusion era usage of the Chinese cymbal, with the cymbal mounted upside down, is his thing. The way he used it was extremely effective, and was widely copied for a long time. Not so much any more, except among Metal drummers.

There is a specific overall vibe on his records that you don't really hear any more— fusion music shifted to a different kind of product, and the type of music on Cobham's records has never really been revived among younger players— unlike Miles Davis's 70s thing, for example. In terms of drumming, by the 80s Steve Gadd's concept and sound became the prevalent thing in the fusion and studio drumming. When I was a student in that period, Cobham wasn't one of the first people talked about. Drummers today largely talk about him in terms of chops and technique, and he's often mentioned by open-handed drumming enthusiasts. If his playing is talked about at all, it's generally in terms of spectacular drumming feats.

You do have to talk about excitement when you talk about Billy Cobham. He plays with a lot of bravado, and is often wildly dramatic. He can be very flashy and very dense, and it's easy to see how people just take him as pure drumming confection. In a way he's the prototype for the current high-performance drumming thing.

And some of his recordings are like that: parts of them are there to blow away an audience. This is to me a festival-style performance, designed to blow a festival audience's mind:

On most of his records there are extended open drum features, which you can take a number of ways. You could just hear them as early versions of the modern drum chops display events, opportunities to marvel at his technical awesomeness. Or you can take them as examples of 70s bloat and “pretentiousness”— a meme from the 70s rock press— like on Crosswinds there's a solo with a lot of flanger on the tom toms, which sounds corny to us now. I listen to them as music, as creative percussion features:

So it can be difficult to distinguish legit musical energy from just excitement over a spectacular performance, but it's something you have to figure out. Cobham is a great musician and people should understand his playing as normal drumming, doing all the things normal drumming is supposed to accomplish. It may be easier to do that listening to him on records where he's not a leader.

His general approach to playing the drum set could be taken as “snare drummy”— hands-oriented, but modern, not particularly rudimentally based. On fills and solos he seems to play a lot of singles, and a lot of open rolls with accented singles. The bass drum tends to be used in normal funk ways, and for accents, and ostinatos, often tied to the cymbals. We don't often hear a fully integrated linear thing, a la Steve Gadd, or Elvin Jones. In that way maybe he's more similar to Tony Williams than either of those drummers. I think he actually uses his bass drums pretty economically, when he's not doing his showy double bass stuff. In interviews he mentions using his left foot to play time, but I don't feel that I often hear that with him. These are all just my impressions from listening— it's not meant to be the complete last word on his playing.

We don't hear drum sounds like his much any more— it doesn't seem to have been widely copied. It's an energy sound, not a deep “power” sound, which is where things were moving in the 80s.  Particularly the tom toms, which are live and tonal, with a sound that is throaty rather than deep/punchy— maybe a combination of Black Dot heads, and moderate tension on the bottom head— as opposed to the loose top/tight bottom for the Gadd-like sound. His snare drum has a very tight, dry sound; it's tuned rather high, with the snares highly tensioned. Clearly his bass drums are large, and somewhat live, but it's a controlled sound, not a huge sound.

This is all set up for listening to him a lot, so please do that. If you're into vinyl, many of these you can find cheaply in used record stores:

As leader:
A Funky Side Of Things
Crosswinds
Alivemutherforya
Total Eclipse
Spectrum

See his selected discography on Wikipedia for more.