Hey, we haven't done any Elvin Jones in a while. This is the beginning of Survival Blues, from McCoy Tyner's album Extensions. I started where McCoy begins the vamp, and did as much as I could do in about 90 minutes, and that happens to be where something is changing musically— we're easing into the tenor solo. The tune is a loosely structured modal thing, with a swing feel. 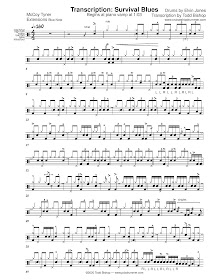 We get a pretty clean look at his playing here, including a useful 16th note thing he does a lot. He plays the hihat pretty sparsely, often one note per measure, which seems significant, somehow. The hihat and bass drum are generally not active at the same time here. I'd pay attention to the big accents lower on the page. Playing “like Elvin” seems to call for a lot of listening to McCoy's left hand....

The transcription is generally playable, but there are sketchy fills in measures 12, 32, and 40— if anyone is serious enough to try to figure them out. I gave some possible/likely stickings where I could. Bar 12 is the flakiest, both the fill, and my notation of it. Beat 1 is accurate, the rest of the measure you have to slur like crazy. Bar 32 should clearly start with a RLLR, then play fast singles where a roll is indicated— the two slash marks on the quarter notes indicate 16th notes, but play them whatever speed you need to. That bass drum note on the & of 4 should be in swing 8th timing. Bar 40 sounds like it's in an even rhythm all the way through— he doesn't speed up for the quintuplet in beat 4, so you have to slur the whole measure and fit it in. Or you could treat the last three notes as a 16th note triplet, and the rest of the measure as 16th notes.