Just a little throwaway graphic illustrating the connectedness of flam rudiments. People think of them as “omg a bunch of different things”, but they use very similar motions. 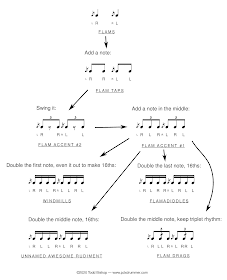 The key rudiment here is the Flam Accent #1— you get the others after it by just doubling one note, and playing with the rhythm. The pattern named Unnamed Awesome Rudiment is now named Unnamed Awesome Rudiment, or UAR. I like it better than the other 16th note flam rudiments— Windmills are easy but dull, Flamadiddles are just loathsome. UARs are difficult but hip.
Todd Bishop at 10:20 AM
Share