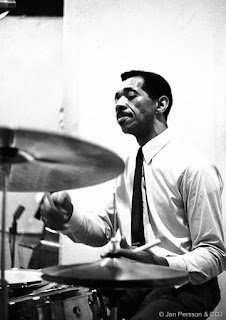 This series is difficult for me, because it means writing a lot of words about somebody's playing, at which I am not good. I never felt a need to put it into words. It also takes some nerve to say let me tell you all about Philly Joe Jones, when I know at least a dozen people in town with more meaningful things to say about him.

I never had a passionate Philly Joe phase. With many players, you get so into them that, for a time, the way they play seems like the only way to play. I wasn't aware of that, but I think I was trying  to play like him anyway, because he's inescapable. He's like oxygen, he's everywhere on the records you listen to, and his stuff is just what you play.
Listening to him now I hear a complete architecture, like somebody dropped the Chrysler building in the middle of the recording. I don't know when my perception caught up with reality, which is:
Philly Joe Jones is a pure classic entity, the hard core of the practice of jazz drumming for all time. In my mind the strongest, clearest voice playing modern bop in the 50s. He's on many of the biggest records of the period, and is often well-featured, and well-recorded. Most often he's a sideman, so you hear him doing the true drummer's job, playing assertively in a supportive role. He seems to have wrapped up and finished a lot things created by Max Roach, Kenny Clarke, and Art Blakey.

Generally a clean way of playing— in the sense that everything is lined up, and he's not fluffing the more technical stuff. Compare with Max Roach and Art Blakey, both of whose execution can be rougher at times. He's also clean in the sense that his “style” may not seem real overt to naive ears— at least compared to some of the other very greatest players— the “Magnificent Seven”. In no small part because so much of his playing = normal jazz vocabulary now. The stuff is so familiar that he becomes invisible. It's easier to sense the character of his playing by comparing him with other top 50s drummers— with, for example, the very clean, bright, and chipper Joe Morello or Stan Levey. Next to them Philly Joe is edgier, with a very substantive, deep R&B sound. That sound is what we're after. That's the whole thing we're after.
He is snare drum oriented, and rudiment oriented, with a rather crusty sound on the snare drum— I can only contrast it with Buddy Rich's hyper-aggressive brassy sound. Joe is much funkier. You can get some of his vocabulary through Charley Wilcoxon's books. He's one of the first players I associate with a really polished brush technique— I see some vestiges of the showy, classy, vaudeville thing I associate with Papa Jo Jones. Maybe those observations just reflect the narrowness of my education.

His cymbal beat is fairly straight, with a solid quarter note pulse— with an emphasis on the skip note when playing in 2. I don't hear a particular accent on 2/4, and I don't have the impression of hearing a lot of variations in the overall rhythm, except at the beginnings of choruses, or at other times when he's dropping a lot of big accents. He does have a variety of very distinct inflections with the cymbal, for example suggesting a 2 feel, or a double time two feel. Everyone does that, but there's a particular authority with Jones, like it's a real part of his presentation.

He generally uses larger drums— a 22" bass drum, and 13 and 16" tom toms. Not necessarily real big cymbals— often a 20" ride, with a moderately bright, complex 50s A. sound. I'm sure he's using Ks part of the time. Strong hihat on 2 and 4, a la Blakey, with frequent open hihat/bass drum accents on 4 at the top of a chorus or section. He's moderately active with the bass drum; he doesn't do a fully-integrated thing like Elvin Jones, but he does use it interactively in his soloing. As I've noted before, he will sometimes alternate measures/phrases of snare drum ideas with measures of bass drum interactive ideas. Generally it's a deliberate, sparse, bomb-like attitude with the big drum. I can't recall having the impression of him feathering audibly, although he's certainly doing it.
He has a lot of interesting, hip ways of setting up kicks. Listen for that.
Finally, there is an aspect of his drumming that gets missed— this is not just jam session drumming. There is a show aspect here; much of what he does is about presenting the band, setting a stage environment for the performance of that tune. You definitely hear that with Max Roach and Art Blakey, too, and others.
This is all just an invitation to do your own listening; you'll probably find many counter-examples to my observations. Just listen and start making your own wrong observations. There are many videos of people telling you all about his playing, and maybe they don't all suck. Listen to 99 minutes of his playing for every one minute of that.
Ten + records:
Miles Davis - The New Quintet, Round About Midnight, Milestones, every other Miles record
John Coltrane - Blue Train
Bill Evans - Everybody Digs...
Sonny Clark - Cool Struttin'
Milt Jackson - Bags Meets Wes
Clark Terry - In Orbit
Sonny Rollins - Newk's Time
Hank Mobley - Poppin'
Some tracks:
Billy Boy - Miles Davis
Two Bass Hit - Miles Davis
Dear Old Stockholm - Miles Davis
The Theme - Miles Davis
Oleo - Miles Davis
Night And Day - Bill Evans
Pot Luck - Wynton Kelly
Soft Winds - Chet Baker
Please leave your own tune / album recommendations in the comments— to me these examples just = jazz. I'm not always looking for dynamite drumming performances.
See my other Philly Joe Jones posts.
Todd Bishop at 6:29 PM
Share