Did you ever transcribe 72 bars of Roy Haynes, just to realize that all of the really cool stuff was in the NEXT 36 bars? I wanted to do an easy little comping transcription, but with this one I just had to keep going. And that was after I wrote most of a page of another track, before I realized this is the one I wanted to do: Blues For Liz, on Paul Gonsalves's album Cleopatra Feelin' Jazzy. Not obviously a record to immediately grab on seeing it in a record store, but it's great.

The transcription is from Gonsalves's solo, starting at 0:47, and is nine choruses long— 108 bars long. 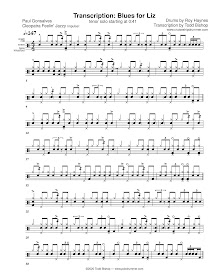 You could make a serious comping lesson out of this. Most of it is playable, and conceptually clear; there are some things on the last page that would not make sense to try to duplicate. The parts are mostly non-independent— the hands are largely played in unison, both feet are often played in unison. The bass drum is sparse and subtly handled, with relatively few big accents. He often splashes the hihat with his foot— they have a soft sound that blends nicely with the overall sound. His handling of the snare drum is very nuanced, much more than can be communicated in a transcription. He frequently punches the & of 3, or & of 3/& of 4 with a buzzed stroked on the snare drum. He plays that “single stroke four” item quite often.