The sort of thing you write when you're under quarantine— a library item strictly for maniacs, in the same ballpark of extremity/uselessness as Gary Chaffee's jazz patterns, from Patterns vol. 3. In fact that's exactly what I'm working on right now, and what led to this.

I've written some three-note sticking patterns for three voices: R, L, B. Then I wrote them out for drumset, with R on cymbal, L on snare drum, and B meaning either Both hands or Bass drum. Then I did some additional patterns including right hand/bass drum unisons; and some more patterns including both hands unisons. 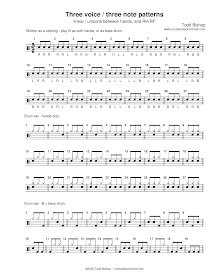 Like Chafee's thing, these are ordered by a mathematical logic, not the way a rational person would use them. Very useful patterns are mixed in with not very useful ones, and normal vocabulary items are mixed in with not at all normal ones. It limits how fast you can do the complete system, and doesn't lead you directly to normally-useful material. So the only people who should be using this are hardcore practicers, or lifers like me who can already play, but who want to fill in some gaps. It should be helpful for developing a triplet-feel version of a ECM feel, or a ballad in the manner of Tony Williams playing Fall, maybe.