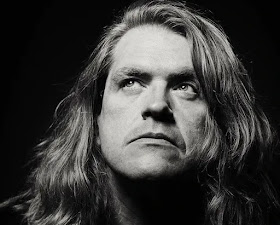 Sad news, Portland drummer Steve Hanford, aka Thee Hippy Slayer, has died. Best known for playing with iconic Portland punk band Poison Idea. I'm not a follower, but I have a lot of fondness for them; my friends and I, in our Iron Maiden shirts, saw them play in a basement in Eugene in 1983. We were not the coolest kids there. That was my first serious rock & roll experience.

In the late 90s Hanford produced a demo by my rock band The Raging Woodies— originally a very aggressive acoustic guitar-led project, it took a Black Sabatthian turn under Hanford's direction. He was having substantial drug problems then, but he was a skilled rock producer, and a fun, hilarious guy to be around. At about that time we saw him play a great show at The Satyricon with a short-lived band called Pink (formerly Slowface). He was a great rock drummer, and played with a lot of power.

Here he is playing with Poison Idea in 1988: