Here's a little sub-rant of my other recent teaching rant. I wrote this in January, and wasn't going to post it— it's kind of silly. But people seem to enjoy these, and it's not totally devoid of educational value, so here it is.

Some things are so wrong you have to talk about them at great length just to understand how wrong they are, so here's that graphic from that other post: 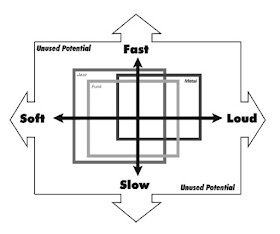 I grabbed it off the web and shoehorned it into that post because I couldn't find anything better to illustrate the subject: drum instruction that is totally divorced from reality.


What are we seeing here?
The graphic is taken from from Dom Famularo's book It's Your Move, and posted online at a site called The Black Page, where it is used to illustrate an article called “Pedal control.” I don't know the site, but it appears to be about the development of extreme drumming chops in the Jim Chapin / Dom Famularo mode.

It's a kind of diagram of the universe of developing drumming abilities. There are axes of SLOW/FAST and SOFT/LOUD, each expanding outward into infinity. Within that field there's a sort of Venn diagram of the overlapping slow/fast/loud/soft requirements for three ways of playing the drums: JAZZ, FUNK, and METAL. The three ways.

In the ether of that dual-binary cosmos, beyond the scope of all abilities you could conceivably need  for THE THREE ways of playing, floats the infinite gulf of your UNUSED POTENTIAL. We could alternatively call that “technical skill unneeded for any known music.” It hovers out there forever like Original Sin, since it is infinite, and every human being will always have unused potential.


What? No.
In plain old musical reality, there is no infinite frontier of speed and volume. There's no such thing as SLOW, for example. It's an illusion. In drum technique terms, there is nothing slower than a single isolated note, regardless of the actual space between notes, or the tempo of the musical context. To play slow tempos we subdivide; converting the slow tempo the audience hears to a more easily performable faster tempo. So slowness is not a thing.

Fastness has the problem of the long tone barrier. We've talked about this before; above a certain rate, the human ear perceives single notes as a long tone. The rate at which that happens varies with the instrument, but it is well within the reach of any committed student. Rates faster than that are purely statistical, because they have little musical effect, beyond a slight change in texture.

The pursuit of infinite quietness is checked by the meathook reality of the signal to noise ratio. There's a certain level of volume beneath which room noise, the sounds of player's fingers on their instruments, blood pressure on the human participants' ear drums, tinnitus, the waitress serving drinks, begin to disrupt the perception of the music— for the listeners, and just as importantly, for the other performers. All music intended to be heard needs to be loud enough relative to environmental sounds to be perceived continuously. Try it sometime. Learn to play really quiet, and then play that way on a job. You may not get any complaints, but it will be a weird experience for everyone.

I'm getting bored, so let's just say this of infinite loudness: is anyone really asking you for that? If so, get a PA.


There are other things
What did these qualities slowness/fastness/loudness/quietness ever do to earn this claim on your time and energy? Try listening to records, learning about African music, playing piano, composing, arranging, learning about recording, learning to paint, writing poetry, raising your kids, finding a spouse, maintaining your relationship with your spouse. Learn to cook.


Dude
It's just a graphic from a drum book. I know this. But you can't introduce the concept of infinity and UNUSED POTENTIAL and then limit your scope to these tawdry and ultimately wrong metrics of ability. Come on.
Todd Bishop at 11:58 AM
Share