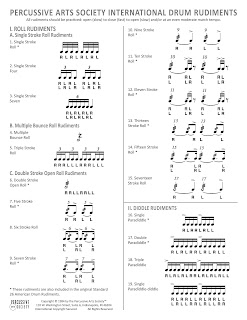 Here at last is my opinionated commentary on each of the 40 PAS international drum rudiments— the good are praised, the questionable are denigrated and hounded from the public sphere. The abstruse are eschewed.

I'll put my bias up front: I'm most interested in what helps me play creatively on the drum set, and on that instrument I'm not a very snare-drum centric player. I don't do band, orchestra, or rudimental percussion professionally/seriously, though I did get a serious education in them.

We should also be clear on the basic terms the way I use them, the way they were used in the community in which I was educated:

• Roll is reserved for running doubles, singles, or multiple-bounce strokes that are rapid enough to sound like a long tone.
• Ruff = an unmetered multi-stroke embellishment.
• Open = double strokes, closed = multiple bounce strokes. Traditionally in rudimental drumming, those are often taken to mean slow and fast.
• Drag = one multiple-bounce or double stroke, played as an embellishment, or as part of an ongoing rhythm. This is not a universally correct definition, but it's how the word was used in the field by people I was around.

Single stroke roll
Rapid single strokes are used for making a long tone on most percussion instruments— cymbals, mallet instruments, timpani, concert bass drum, almost all other concert percussion instruments except snare drum. It's usually a mundane thing, with discussion of it centered on what is correct for the particular instrument— mainly for sound. Speed is only a concern to the extent that instruments with long sustain call for a slower roll, and instruments with shorter sustain call for a faster roll. As technique enthusiasts have taken over, now the single stroke roll is thought to be just a high performance item, and the major concerns about it are speed, and training methods.

Single stroke 4
Traditionally known as a 4-stroke ruff, written as you see on the left, and played with single strokes, with three grace notes embellishing a main note. PAS now writes it as a rhythm, with four even notes. Somebody just decided 4-stroke ruffs are not a thing any more, despite it being a common item in concert snare drum literature.

Multiple-bounce roll
Or “buzz” roll, or closed roll. I use all three terms. This is the only type of roll used in band/concert snare drum— and only on snare drum. No buzz rolls on timpani or cymbals, please. It is a fundamental technique for anyone serious about the drums; still, many set players rarely need to play one.

Triple stroke roll
This is a way of playing sixtuplets in corps drumming, and serves no purpose at all outside of that activity. Really not in the same category as a multiple bounce roll; multi-strokes are not the same as multiple-bounce strokes. The triple stroke roll is a flash corps item, a multiple bounce roll is universal snare drum technique for making a long tone. I might conceivably use a variation of this as a chops developer, starting with a single note, so the last note of each triple stroke falls on the 8th notes.

Double stroke open roll
Just say double stroke roll or open roll, saying them both is unnecessary. I say open roll. Used in drum corps, and in soloing and embellishing on the drum set. It's an essential drumming technique, despite not being widely used in concert percussion.

5-stroke roll, 9-stroke roll
Two essential short rolls. These are played multiple-bounce as frequently as double-stroke, so it's misleading to put them in this category. Same with the 7 stroke roll and longer rolls.

6-stroke roll
One of the hippest of all rudiments for flashy, fusionoid soloing. Much used and abused by many, many “choppy” drummers. Typically played with double strokes, in two major forms: as a sixtuplet (which to me is not a “roll”), and as 16th note accents / 32nd note doubles.

13-stroke roll
One-beat roll played with a sixtuplet pulsation. I never use this term, but like the 5, 7, and 9 stroke rolls, this is really one of the essential short rolls.

10-stroke roll, 11-stroke roll, 15-stroke roll, 17-stroke roll
I never use these terms, ever. With any roll longer than one beat, or more than 5 movements, I'm thinking overall duration and pulsation. To me these are relics from the days when drumming was just about stringing together named rudiments.


Much more after the break:

I would expand this category to include so-called “side” triplets (RLL / RRL / LRR / LLR), and Gary Chaffee's 5 note (RLRLL) and 7 note (RLRLRLL) stickings. See my e-book 13 Essential Stickings.

Single paradiddle
Very important rudiment for drum set musicians, useful far beyond what is suggested by the simple list format. I use the RLLR LRRL inversion more than the standard form.

Double paradiddle
This is my friend Steve Pancerev's favorite rudiment. I could never do much with it, though I can see the possibilities for it on drum set— for example, it sketches out an Afro 6 feel when played in a triplet rhythm with the right hand on the cymbal. Not much fun as a speed pattern.

Triple paradiddle
I never use these, ever. I might do something like this when switching leads during running singles, but not this exact rudiment.

Paradiddle-diddle
Very useful, easy to play fast, and a little bland. Often I prefer the “6-stroke roll” inversion (RLLRRL) instead.

Flam
Normally called an embellishment, but they sound as a single fat note, so I consider them to be an articulation. It doesn't matter. Alternating flams employ an essential drumming motion, but I don't play them that way much in real music— in many drumset applications, and in concert percussion, it's often better to them non-alternating. In rudimental applications they will virtually always alternate.

Flam accent
Formerly Flam accent #1. Flammed triplets, alternating sticking. I consider these to be very important for basic facility, though I rarely use them in this form in playing. More often I'll use repeating left handed flam accents. FYI there is a flam accent #2— basically a swing flam tap—which has fallen out of use with the waning popularity of 6/8 marches. It's actually quite useful in syncopated form, or played same-handed.

Flam tap
They say these are good for developing chops, but I don't see it. Three notes per hand, decreasing in volume, overlapping. I just don't dig these.

Flamacue
These seem peculiarly American, bringing a syncopated accent into a traditional rudimental texture. Demands a solid upstroke, and good for developing your shuffle.

Flam paradiddle
Or flamadiddle. Difficult, not much to like here. I might use these, and their variations, if I were developing an Ed Blackwell-like solo thing on the tom toms.

Single flammed mill
I never use these, but they have a lot of potential, as a Tony Williams-type of fill. Easier to play fast than other flammed 16th note rudiments. Similar motion to the flam accent #1, and they would be good to practice together— looking for organic connections between stickings in different rhythms.

Flam paradiddle-diddle
Unlike regular paradiddle-diddles, these alternate, so the ending double is played with the same hand as the first note of the next repetition. So it's an OK chops developer I guess. Mainly I don't see the point. Some rudiments are just unsatisfying.

Pataflafla
I like this as a chops-developing rudiment. When you can do it well, it feels like you're really doing some drumming. It has a muscular, Tony Williams like feel. Its real utility is pretty low outside of drum corps. Steve Gadd often played a super-elite version of these, with doubles on the unflammed notes— or you could call that a 6-stroke roll with flams on the accents. A Gaddaflafla.

Swiss army triplet
Around here we say Swiss Triplet. Overlapping doubles in a triplet rhythm, easy to play fast, good for developing open rolls— though I don't use them for that. Most used in corps. It's a real fundamental motion, but I don't feel they have a lot of potential on the drum set, and I don't do much with them. I'm generally indifferent to rudiments heavily weighted on the strong beat, as these are— as are flam taps, three stroke rolls.

Inverted flam tap
No one ever actually uses these outside of corps. Should be really good for your chops— for upstrokes, specifically— but I find them to be a big pain in the neck. Hacky. I would rather do something like I describe in the triple stroke roll entry, to the same effect.

Flam drag
When I was in corps this was regarded as an elite rudiment, so I worked hard learning to play them, and I still practice them. It has little purpose outside of corps, but I like it for general facility.

Drag
For my entire playing career this was called a ruff, but apparently some kind of schism has broken out, and that's now controversial. It's a very important rudiment.

Single drag tap
I've never said single drag tap, and no one has ever said it to me, and I have never played these as they're presented on the list. I have played them inverted as accented triplets with a drag (a double stroke) in the middle.

Double drag tap
I don't know, man. This is in Haskell Harr, it's a popular piece of snare drum vocabulary from the heyday of the 6/8 march, but what are we really going to do with this?

Lesson 25
In drum corps we did a lot of these, in various forms, and I never heard “Lesson 25” mentioned once. Same goes for that “single drag tap.” A 16th note or triplet passage with drags (see def. at top of page) would have been called a drag passage. 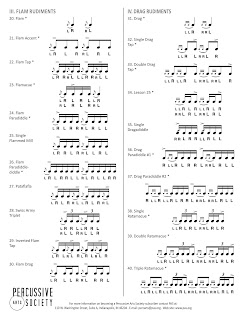 Drag paradiddle #1
I'm indifferent. They turn up in Haskell Harr, and I enjoy playing them there.

Drag paradiddle #2
Whatever #2. Too similar to a triple paradiddle for me to mess with it.

Single, double, triple ratamacue
Would somebody kill these things off, please? I never found anything to do with them, and have never played one in performance in any context ever. Maybe some creative individual could convert the drag + the triplet into a quintuplet, and make a Dejohnette-like lick out of it.


The list overall:
Traditional concert snare drum definitions get shafted a bit— mainly with that “single stroke 4” business. The list includes many things only used by corps people, but it's clearly not up to date for them either, with their hertas and cheeses and galaxy of hybrid rudiments. There's really no good reason to introduce single stroke 4s and 7s, but no 3s, 5s, or 9s. Drag category clings to an almost-archaic ruff-style notation— that category could be rewritten to reflect modern, corps-style usage, with the drags written as part of the rhythm.

The upshot:
Learn to play them. Some of them are useful creatively, some of them are necessary for playing ordinary drumming literature. And there's no reason not to. But they're not all equally useful. Learning them thoroughly requires much more than just going down the list and playing them as written. A subject for another time...
Todd Bishop at 11:50 AM
Share