From the zone: cycling patterns

Since I am completely blocked for writing anything other than profane tweets right now, here are a couple of things from the practice room of our friend in Berlin, Michael Griener. It's a very elegant way of cycling inversions of three note patterns by alternating measures of triplets and 16th notes.

First as a solo idea, using the extremely useful RLB (B = bass drum) sticking in the first half, and LRB in the second half. No reason not to do these substituting the hihat played with the foot for the bass drum. Or both feet in unison— something I'm doing a lot lately. After learning the basic exercise, you should move your hands around the drums, of course. 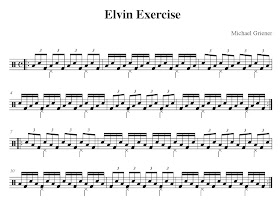 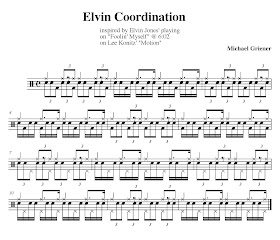 You could extend either of these to drill each individual inversion by repeating the triplet measures, or by extending one of the 16th note measures into 6/4:

You only have to do one of them— as independence practice, at least— because that includes all inversions of the pattern against the cymbal rhythm.
Todd Bishop at 10:42 AM
Share