Very occasional quote of the day: What “a gig” was 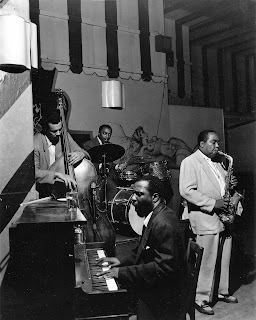 “You didn't get a gig for a weekend, like two days at The Gate. It wasn't like that. We'd stay at a place a week to three weeks, sometimes seven nights a week and five sets a night! At least four or five.

Sometimes if the music was so good we were playing after 4:00 am and the people would still be there! Another thing was that musicians really didn't work steady. When I was with Bird, he would go to Chicago, Detroit or somewhere else for a week. That next week, we didn't necessarily go. The band would come back home until Bird got another gig. So, I started working with other people in between Bird's gigs.”

“The longest period I ever stayed at the Five Spot was with Monk— we'd do like 18 weeks at a time.”