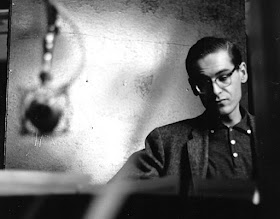 There are a few technique-related posts coming up, and after last week's teaching rant, this quote from Bill Evans is particularly timely. Italics are mine:

“Technique we always think of as being a thing having to do with fastness, too, you know, and technique is, in its highest sense, is the ability to handle musical materials. In that sense, Miles is one of the all-time master technicians, in that he could play something which is an entirely original conception over something that’s very ordinary. So, there are different ways to look at it, too. And actually, he is virtuosic, certainly, and in the best sense of the word. You could get to a point where if you played any more notes it would be funny. So, I mean, how far can you go in that direction?”

That's from an almost-lost radio interview from 1979, mostly on the making of Kind of Blue— do read the whole thing.
Todd Bishop at 9:16 AM
Share