Another thing I caught on Portland's great jazz radio station, KMHD: Cleopatra's Needle, by Steve Turre, with some cool featured drum fills played by Ignacio Berroa. The tune is simply a repeating 8-bar fusion riff in 4/4, with a 6/4 bar at the end for the drum fill.

The fills are very hip, with nice melodic use of the bass drum. I'm always aware of making two-tone melodies between the bass drum and snare drum. It's an unusual performance in that Berroa repeats the same fill several times— the first one is played twice verbatim, and then several more times with variations. Maybe it's a Cuban thing. Apart from the fills, it's also worth paying attention to how he changes his cymbal rhythm over the course of the tune. 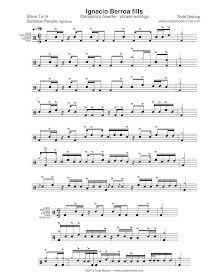 There are three tom toms used on the recording. Hearing where the fill begins may be difficult for some people at first; the last ensemble accent before the fill is on beat 4 before the transcribed fill. At the end of the tune, the end of phrase figure is repeated, with only a four-beat drum fill. The last fill on the page begins on that ensemble hit on 4.