Let's talk about a big scary hard thing: the jazz section of volume 3 of Gary Chaffee's Patterns series— the Time Functioning book. It's in a similar category with the harmonic coordination in Dahlgren & Fine, in that the materials are hard, and they're written in a way that makes it hard to practice them, so hardly anyone ever does.

Maybe it's just me. Maybe I'm supposed to just work on what they put in front of me and shut up. Before I waste a lot of time practicing something I've always needed it to make sense musically, and time-economically. But Patterns is a big important series of books, so let's try to figure out what can and should be done with it, if anything.


What it is
It's 12 pages of three-note (or rest) independence patterns, for up to three voices— snare drum, bass drum, and hihat. Starting on page 25 of the version with  the cover you see above, which is probably what most people have. It's intended that you play the patterns as triplets, along with several one- or two-beat jazz-type ride cymbal rhythms. There are exercises for each voice by itself, linear combinations, and “harmonic” combinations (meaning the patterns include unisons). Basically all possible 3 note/rest combinations for the three sounds.


Why it's hard
It's less a playing method than a straight technical library: a collection of raw patterns, presented in math-logical order. Which is not necessarily most helpful for actually learning to play them and use them.

Taken as a whole the materials serve a rather narrow category of jazz drumming. Single-beat comping ideas are a very small part of what is possible musically, and complex triplet-based comping materials are practical only at the lower end of the normal tempo range for jazz. Many of the patterns have a single voice playing all three notes of the triplet, which imposes a further technical limit on their maximum usable tempo.

There is also no broad concept for using the patterns in real playing. Some patterns will recognizable as normal jazz vocabulary (presented more concisely in other books), some will be useful to individual players who will figure out their own way of using them, and some will serve only as independence conditioning.


What to do with it
Just playing the system as intended at a slow tempo takes a good amount of time, but that is the first thing to do. Play all patterns with each of the four suggested cymbal rhythms.

As you increase your tempo, the first major edit I would make is to skip all rhythms where any single voice is playing all three notes of the triplet. Then if you want to develop high-speed running triplets on whatever limb, you can make it a separate project, focused on developing the special technique required for that. As you get faster you can cut the more impractical patterns, but at some point you're better off working from a book that is designed to be played at normal tempos.

I also work the patterns with a jazz waltz cymbal rhythm (still with the patterns as triplets) quarter note triplet cymbal rhythm, and an Afro 6 bell rhythm— anyone who has spent significant time with my Afro 6 pages o' coordination may want to explore that. 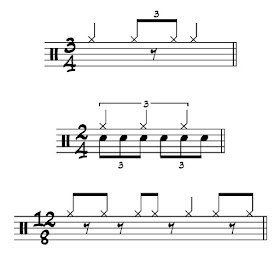 Honestly, drummers looking to use this book to develop a functional modern jazz vocabulary could also include part of the funk section of the book— the snare drum/bass drum linear exercises and hihat exercises in 2/4, starting on page 15. Just double the rhythms so 16th notes = 8th notes, swing the 8th notes, and practice them along with the same cymbal rhythms as the regular triplet section.

I should point out: there are a lot of patterns to play in this system, and playing all of them is not the only way to approach it. In real life drumming, any one thing you learn to use effectively is a big deal. In the past, part of why I could never get through this system is that I would play one exercise, or a few exercises, and would spend so much time exploring it/them, that I would never get to the rest of it. That's not a bad idea.


The upshot
This is a difficult book requiring a lot of time, and some ingenuity, to use effectively. It's really for elite students with extreme work ethic, operating in a very healthy musical environment. Hardcore maniacs who are also very musically together. Also good for lifers like me who never stop practicing, who like devising their own practice systems, and learning different ways of doing the same thing.

This method is more a system of conditioning than a way of playing, but it naturally supports a modern, abstract, ECM type of feel in a triplet rhythm— a la Jack Dejohnette or Jon Christiansen—at slow to moderate tempos. It will also be good for developing some freedom with normal 12/8 grooves. It's a good technical library for whatever creative purposes you can cook up for it, especially 12/8 grooves, 3/4, and meter within meter applications.

The musicianship is not in the book. With a book like Art of Bop Drumming, which is primarily a style guide, a diligent student who knows very little about jazz could actually learn to be a passable jazz drummer. That's not going to happen with Chaffee's book.