Hey, the longest transcription we've done in awhile, here, a three pager. It's Jack Dejohnette playing on a very interesting record I had not really heard before: Peacemeal, by Lee Konitz, recorded in 1969. It's a quintet, with Konitz on alto and tenor, and some electronic device, and Marshall Brown on valve trombone and baritone horn. This is a jazz arrangement of Peasant Dance, from Bela Bartók's Mikrokosmos. This is the blowing over a vamp starting at 1:20. 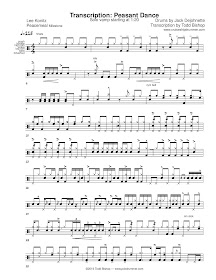 It was difficult at times for me to isolate the bass drum from Eddie Gomez's bass playing, so I probably left some out, or put some things in that were actually the acoustic bass. Dejohnette swings his 16th notes for much of this; relating that back to this recent post, that's equivalent a normal jazz tune played at quarter note = 230— getting towards the upper limit for swinging the rhythm.

After the recent Max Roach series, I like the idea of making study guides based on transcriptions— maybe I'll get to that later in the week.