A moderate samba groove using the tom toms, from one of my favorite Brazilian drummers, Milton Banana. He plays this briefly at the beginning, middle, and end of Samba do Perdão, from his album O Trio. Briefly is the only way to do it; the track is only 1:45 long. The entire record is under 29 minutes.

Here I've transcribed the groove from the end of the tune:

Note that there's no hihat played with the foot— as is often the case with a lot of drummers.

During the body of the tune he uses both of these one-measure grooves— mostly the first one, with the second one as a variation. A few times he plays them both in sequence (minus the rim click on the & of 4) to make a two measure groove. 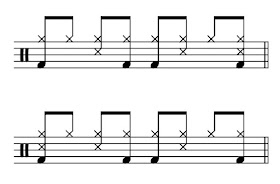 This tune is the first one in the video, and the transcription above starts at 1:32. Banana has a way of sounding like a conductor when he plays figures and fills— the attitude feels different from someone who's just playing the arrangement.