Transcription: Fred Braceful - All That Funk

Here's an interesting performance by Fred Braceful, a drummer from Detroit who lived in Germany for most of his career, and recorded mainly with German artists. He also recorded a couple of albums with Mal Waldron; this is part of All That Funk, from Waldron's album Spanish Bitch, recorded in 1970.

Braceful's playing here is rather eccentric, and much of it sounds kind of rough. I transcribed only part of the beginning, and the drum solo, which starts after 5:25. I had the record on in the background to doing something else, and the middle of the solo caught my attention as sounding strangely current. 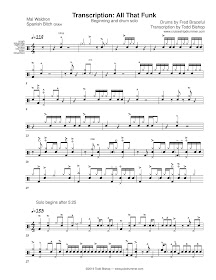 He mixes up his sounds on the snare drum quite a bit; we hear a couple of different quality of rim shots, occasional rim clicks, and missed notes where he hits the rim. Maybe there's even a bongo in the set up, coupled with the snare drum. I couldn't be bothered to figure out what exactly is going on, just note that he gets a lot of variety with the snare drum voice.

The tempo does speed up substantially— mainly during the piano solo, and coming out of the drum solo. It sounds like Waldron is instigating that, and Braceful is struggling to find a pocket with him.


By the way, here's a video of Braceful playing in 1967, which is much more happening.
Todd Bishop at 9:23 AM
Share