A 16-bar drum intro played by Ed Blackwell on The Way You Look Tonight, from Mal Waldron's album You And The Night And The Music.

I like to post these things to shame myself for still not releasing the Book of Intros— a three year old barely-unfinished project. The thing is almost done, and I don't know when I'll actually release it. Next year? This is how it is. It's hard to open up a project again once you've gotten away from it. 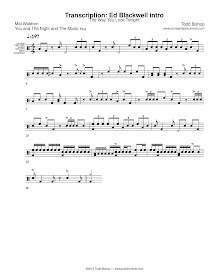 This is a good candidate to actually learn to play— you'll want to figure out stickings for the more technical parts. Most of them here may be singles. Blackwell has a rather muscular sound on the drums that I attribute partly to that.