A smoking short drum solo by Al Foster, playing with Cecil Payne and Duke Jordan on their album Brooklyn Brothers. The tune is Egg Head, a little three minute burner. It's a blues, and Foster plays two choruses— 24 bars. The tempo is about 275, so half note = 137. At the low end of what are considered up tempos. 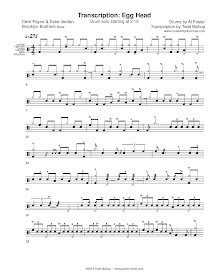 Mark in your stickings if you're going to play this, using doubles wherever possible, especially on the fast triplets at the end. The rolls in bars 17-18 are played at 16th note speed, so play them as doubles on a straight 8th pulsation.

There's some hip modern stuff in here— I'll actually break it down a little bit in a follow up post, and give some suggested stickings. I like what I did with my Max Roach / Freedom Suite transcription, and will probably be doing more little study guides developing playing ideas found in the transcriptions.

YouTube isn't giving me an embed code for this video, so you'll have to dig it out of your record library, or open it in a new tab to listen.
Todd Bishop at 7:43 AM
Share