Notes on a Lenny White performance 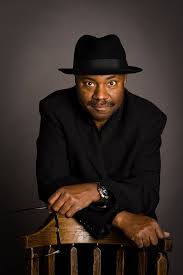 I got to see Lenny White play last night, with the pianist George Colligan and bassist Buster Williams, at Portland's 1905 Club. Here are a few impressions. Between watching a performance and writing a blog post about it there's plenty of room for inaccuracy and incompleteness. Anything that sounds like criticism is not criticism.


Basic orientation
He played a right handed drumset with the cymbals reversed— ride cymbal on the left, crash cymbal on the right, and did all riding with his left hand— on the big cymbal and the hihat only. Matched grip— I've seen him play traditional grip with his right hand, but didn't notice that last night. He played the hihat mainly heel up, often keeping a running pulse going with it. I didn't get a look at his bass drum technique. His body was very centered and relaxed, not herky-jerky. Like most great players, his hand technique was unremarkable-looking. He had a normal relaxed grip, so-called American or German grip, without much obvious finger technique happening. Very much a whole-drumset player in the modern sense.

He was playing the house drums— probably still with my tuning, because I played them a few nights ago— toms tuned high, with a nice interval; live, tonal bass drum; snare drum high and dry, rather weak sounding.


Economical
Like many of the players I like the most, his denser playing was economical and non-technical— and it was plenty dense at times— meaning he used lots of singles and doubles. Which is our whole project here. Not a lot of technical, snare drum-istic playing. No fancy moves with the brushes.


No particular advantage to playing open-handed
White is one of the famous examples everyone cites in defense of playing the ride cymbal with the left hand. He does indeed do it— he had the big cymbal on the left, and an 18" crash on the right. Like everyone else, he plays the cymbals mostly with his cymbal hand, and keeps the other hand mostly down on the drums. He never rode with his right hand. So he would often cross over to catch the 18 with his left hand. And being that it was on the far side of the bass drum, it was a bigger reach for his left than play the left-side cymbal typically is for a right handed drummer. The whole reason everyone wants to play open-handed— so they can play a lot of tom toms while also playing the hihat— he never really did. He did that at times when playing the ride cymbal, but it's also easy to do that when playing a standard orientation.

It doesn't matter for him; he's a great player and has been playing that way for something like 60 years. I still don't think it's a great idea for other people to do it.


Tune oriented
The primary organizing principle seemed to be the tune, and to a lesser extent the four and eight bar phrase. There were extended periods when he played mostly straight time, but I didn't experience his playing here as being primarily groove-oriented. Maybe it's better to say it wasn't mainly about stating the groove. He often played what I would call featured comments; big accompanying statements that were not always on the same grid as the primary groove. Somewhat reliant on the bass to keep the through line during the more active parts— a thing that is said about Tony Williams with Miles as well.

But he varied it. For most of the piano solo on Bemsha Swing he played a shuffle. When he played brushes he mostly played time.


Tony Williams-like
Tony's playing in the 60s was clearly a formative influence. Listen to Four & More a lot to get the effect. Lots of pattern-based melodic action between the toms. No particular Tony clichés, but he did play a five-note cymbal rhythm quite a bit when the group played ESP. At the beginning, at least. Maybe he played a superimposed waltz groove based on a quarter note triplet for a few measures, on another tune.

In this interview— all of which you should watch— he mentions “the magnificent seven”: Art Blakey, Max Roach, Philly Joe Jones, Elvin Jones, Roy Haynes, Tony Williams, Kenny Clarke. Listening to him the feeling of that history was obvious, but not overt; I felt the vibe of Max Roach and Philly Joe Jones— though not Philly Joe's rudimental thing.