A little 8 bar break played by Ben Dixon— this is really just an excuse to listen to his playing on this track overall. The tune is Lullaby of the Leaves, from Grant Green's album Grant's First Stand. Dixon's playing on it is what groove in jazz is all about— he just bangs it out with a really strong quarter note pulse, with a few embellishments, and conducts the section changes. He plays a few big fills during the solos, that are sort of like featured comments— they're loud, and they're not just there to be supportive of the groove.

On the head out he plays a solo break on the bridge, which is what I've transcribed here. It's very straightforward and well structured, and a good example of soloing to move the arrangement along. He plays the tune for the first four bars, then two bars of an actual solo statement, then two bars to set up the last A. 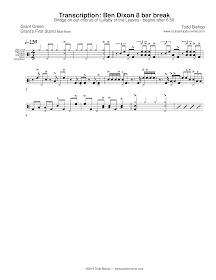 Bars 5-6 are a little rough; he's just going for it and doesn't have it all perfectly worked out. It doesn't matter. That's how people play when they're just playing all the time and don't necessarily practice a lot.