A page for teachers, for beginning through intermediate level students. I want them to have total clarity on what it feels like to play all the major limbs, and unisons between limbs, and the basic two-note sequences with them. At this basic level, that means right hand and right foot together, and both hands in unison. No left foot, no left hand in unison with the bass drum.

These are what's needed to begin playing basic 16th note funk-type patterns on the drum set. Actually lines 2, 6, and 7 are not strictly necessary for that, but they're such basic coordination patterns I had to include them. And there is a level of simplicity below this, for doing beginning rock beats, which requires only RH by itself, both hands in unison, and RH/RF in unison. So far I haven't had the need to write that out. 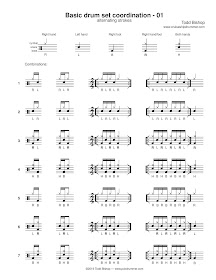 Notes for teachers— anyone who needs this page probably won't be able to self-teach it correctly:

There's no need to work for speed or anything else beyond a clean sequence of notes and accurate combined rhythm.